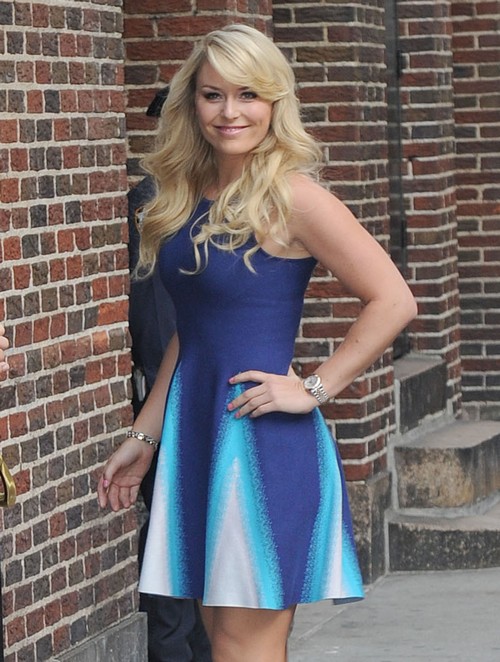 Lindsey Vonn and Tiger Woods have a very interesting relationship. He stays quiet, and she does all the talking – at least, it certainly seems that way when it comes to public interviews. Lindsey and Tiger have been dating for more than seven months, and in an teaser clip from Lindsey’s interview on Katie Couric [airing on November 5th], the 29-year-old athlete discusses her famous boyfriend.

Tiger Woods, dorky? Is Lindsey also Tiger’s publicist now, in addition to being his girlfriend? Is this some sort of unofficial PR tour to fix Tiger’s image after the cheating scandal‘s blown over? Forget Tiger Woods, womanizing playboy. Meet Tiger Woods, goofy and dorky golf player, and wonderful boyfriend.

I don’t know who Lindsey thinks she’s kidding with this. I wouldn’t be surprised to find out that she was being paid by Tiger’s PR team to say all these things about him in public, or maybe it’s a stipulation in their dating agreement – she must say nice things about him in interviews, or she gets dumped. And considering that Lindsey’s public profile has increased tenfold since she started dating Tiger, I’m sure she won’t want to get rid of the attention so quickly.

What do you guys think about Lindsey’s comments regarding Tiger? Do you think she was being genuine and telling the truth, or was she trying to do some quick PR-fixing? Let us know your thoughts in the comments.