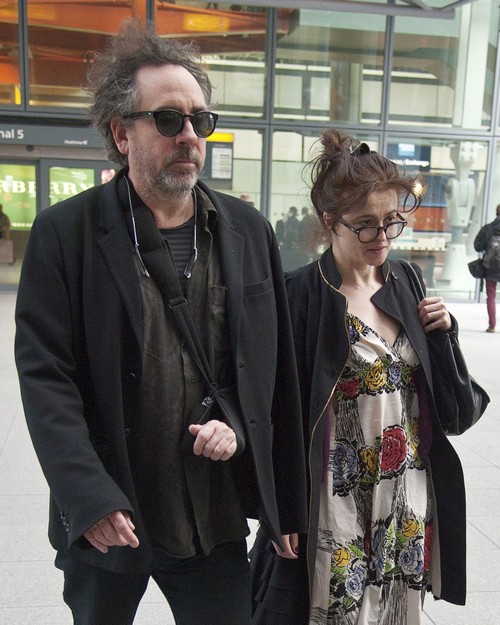 Could Tim Burton be cheating on Helena Bonham Carter? Say it isn’t so! Helena and Tim are my favorite off-kilter couple, and they always seemed like they’d be together forever, not least because of their unusual living arrangements and working relationship.

Alas, directors are just as unreliable as actors, and I guess we shouldn’t be surprised when one ends up being unfaithful to his wife or girlfriend. Page Six has published an exclusive report with several pictures purporting to be Tim Burton kissing a mystery blonde after watching a production of The Wicker Man in London. Eyewitnesses claim that they saw Tim and the blonde go into an alleyway, where they ‘kissed and then drove away‘ in the blonde woman’s car.

Now, I’d like to believe that this isn’t true or that there was some mis-information. However, it unfortunately seems crystal clear that Tim was cheating on Helena. He was with a mystery blonde out and about in London – ok, that could be innocent. But he was photographed making out with her in a dark alleyway? That seems like he was trying his best to avoid public places, and why the need for such secrecy if there was nothing going on? And of course, there’s the pretty unrefutable pieces of evidence – the pictures of him and the blonde kissing. How do you explain that, apart from saying that he was cheating on Helena? Unless he tripped and his mouth then fell on her mouth by accident – which even for Hollywood, might be a stretch.

What do you guys think about Tim Burton cheating on Helena Bonham Carter? Do you think it was a one-time thing, or has this been going on for a while? Let us know your thoughts in the comments.