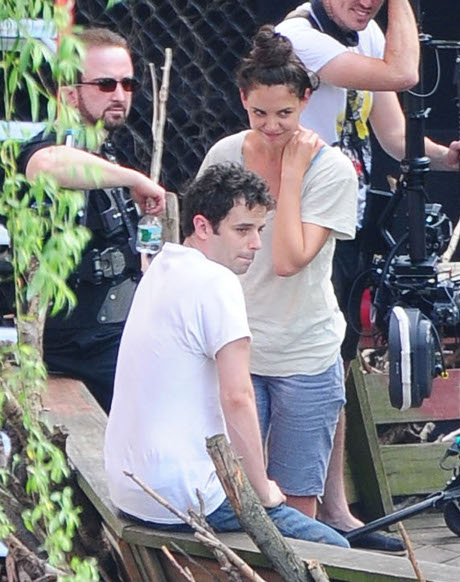 Uh-oh, it looks like somebody’s ego is taking a really big hit — and by somebody I mean Tom Cruise! His ex-wife, Katie Holmes has been filming Mania Days in NYC with Luke Kirby and it seems that the chemistry between the two is beyond palpable. After spending a year as a single mom, rebuilding her life with Suri in NYC, Katie is clearly ready to move on. According to the June 17th print edition of National Enquirer, Katie admitted to friends that Tom ruined her emotionally and therapy all but saved her.

It looks like her new co-star is also reminding her that she’s a grown woman with needs too. Photos coming from the set show Katie looking very comfortable with her own sexuality and completely present in her love scenes with Luke. Tom has seen some of the photos and is absolutely furious because in spite of being married to Katie for years, he never saw her appear to be that turned on! Rumor has it that Katie and Luke are also spending quite a bit of time together off set as well.

Instead of roaming the city freely with her daughter, Katie is being a bit more secretive and it seems that her secret comes in they form of her six foot 2 co-star. They have been spotted eating out together and spend a lot of time holed up in Katie’s trailer. Luke has also spent some quality time at Katie’s apartment which has only added to the speculation that love might just be blooming for the two.

Can you imagine Tom’s anger even imagining Katie with another guy? He really thought that she would stay under his thumb forever I think. I’m also pretty sure that he believed once they split that he would find love long before his former wife. It looks like Katie beat him to it! Do you think that she and Luke are hooking up off-set? Tell us your thoughts in the comments below!