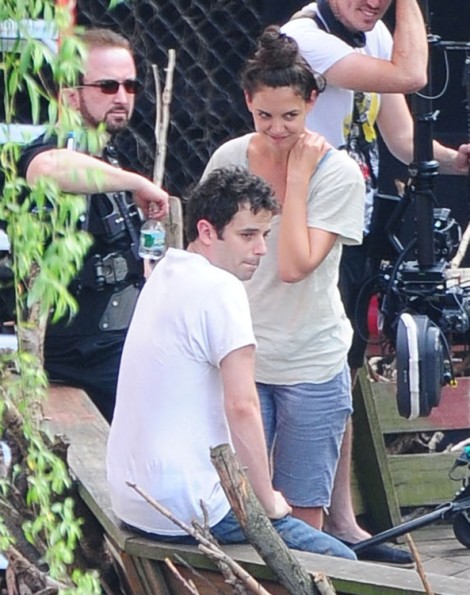 It was inevitable. This might not be true but we all knew it would happen. Tom Cruise is jealous of a C-list actor. He’s a perfect case in point that all the money in the world cannot buy you confidence… or height.

Tom must be reading Page Six like everyone else (or his minions following Katie Holmes are doing their jobs well) because he’s no doubt seen the pics and heard the stories and isn’ t too fond of the Katie Holmes/Luke Kirby hook-up. We’ve been reporting over the last few weeks that Katie has seemingly morphed into a new carefree woman under Luke’s adoring attention on set. Many believe they are mixing business with pleasure especially since their new cat and mouse game with the paparazzi. But now Tommy’s sad. According to OK! magazine Tom still loves Katie and he’s afraid he’s lost his chance at every getting her back. I think that chance was long gone the second she started buying disposable cell phones. Did you know there was a Luke Kirby/Tom Cruise connection? Tom’s production company gave Luke one of his first big breaks by casting him in Shattered Glass. I actually love that movie but talk about a kick in the ass….

So you’ve got to feel for him a little, right? We all know the feeling. You think you’re over someone and then you see them with someone else for the first time and it’s a major kick in the crotch. You get over it but that pain still sticks for longer than you thought it would. That’s what Tommy’s feeling now – a major kick in the junk. It’s nothing a night in with Will Smith watching the beach volleyball scene in Top Gun on repeat won’t fix though.

But that just reminded me. Have you seen the pics of Tom and Connor out with the Beckhams at the hockey game? It almost – ALMOST – made my pity him. There was Beckham with his perfect family and adorable daughter loving it up for the cameras and all Tom could do is sit back and watch. He played along and was nice about the whole thing but you just knew he was thinking “Why can’t I have this?” Sigh. I almost made myself tear up there. If Harper Seven can’t make you denounce Scientology I don’t know what will.