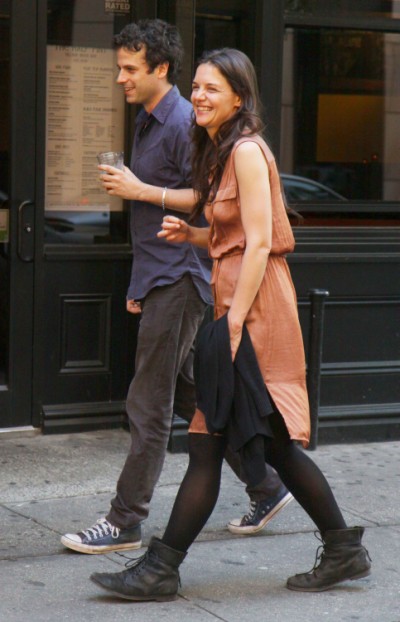 Katie Holmes and Tom Cruise both seem to like the co-stars… Tom might use his to promote his movies and the myth that he’s a normal, sane human being, but you get the point. When you’re surrounded by someone 24/7 it can be easy to form an easy, relaxed relationship. Does it look like this is what Katie has with Luke Kirby? Katie Holmes hasn’t openly dated anyone since the divorce of the century last year. Is this the dude that’s helping her brush the Xenu out of her hair?

Here they are on the set of the upcoming Spike Lee movie. When is the last time you’ve seen Katie smile like that? She seems so young! And he looks like a normal guy. He’s swigging a beer on the street. Would Tom do that? Alcohol out in the open could lead to a softening of senses. Would Tom ever let his guard down in public? Luke Kirby’s a cute kid. He’s mostly done TV work but this movie could lead to a break out for him. I’m excited for this development. But I’m also kinda blah about the whole thing. Didn’t you want to see Katie rebound with someone a little more A-list? I would have loved a Jake Gyllenhaal-type – someone younger whose career is on the upswing – so the opposite of Tom Cruise basically. Perhaps this Kirby is it.

But I also could be jumping the gun. The Daily Mail says the couple were just mixing business and pleasure and going out for dinner after a long day of shooting. Would Katie be so carefree out in the open if she was screwing this guy on the sly? Regardless, whether it is serious or not, I like it. Katie looks her age for once and it shows there is life in the post-auditing world.

What do you think of the pics? Is Katie Holmes dating her co-star or is this just friendly behavior?