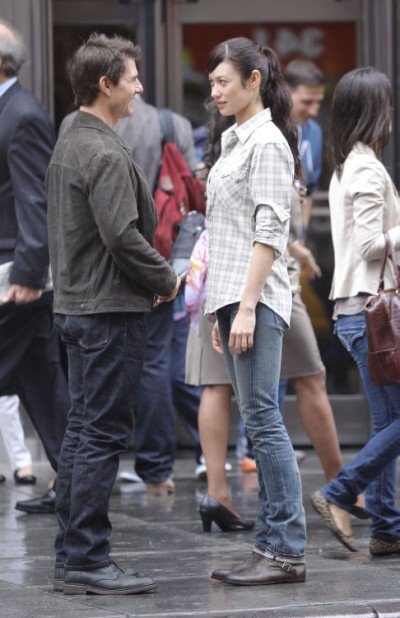 So… is this the reason he’s been very, very happy lately? She fits the bill, right? And don’t act like you haven’t been waiting for this. We all have. It’s been great fun waiting to see who Tom Cruise would pick next to whitewash 2012 and the whole Katie Holmes mess.

Tom Cruise dating is big story and the girl hunt has not been taken lightly. Olga Kurylenko is a co-star. Tom has a history of that (Nicole Kidman). She’s young and most likely impressionable. He likes that too (Katie Holmes). And English is not her first language which has to help with all those pesky rumors (Penelope Cruz). And speaking of rumors, people were whispering Tom had his eyes on Olga back when they were shooting Oblivion and all the divorce shit was going down last summer. According to The Sun, absence has made the heart grow fonder because the couple has been spending more time together now that they are promoting the movie and Tom is finally making his move.

“Tom’s smitten with Olga, she speaks several languages, is funny and gorgeous to boot. She’s based in London and they’ve been out for a couple of dinner dates while he’s been filming All You Need Is Kill,” a source said. “But he’s got a whole arsenal of tricks up his sleeve to woo her when they embark on the press tour for Oblivion and fly between New York, Dublin and Japan. Tom’s taking her on his private jet and is planning sushi in the sky. He’s not been this serious about anyone since he first met Katie Holmes and, from what people are saying, she seems pretty keen on him too.”

Sushi in the sky? Be still my beating heart! But I wonder what Danny Huston has to say about this. Last time I checked Olga and Danny had been dating for awhile. You can’t recall Danny Huston? Just watch a movie made recently – any movie – and I’m sure he’s in it. The dude is awesome. I’ve got a major crush on him so I’d be disappointed if Olga was thinking of jumping ship for Tommy. But she has said things in the past that make it seem like she would. She once told Flaunt magazine: “[Being from a working class family in the Ukraine] helps me to keep my feet on the ground, and there’s no danger of ever taking them off the ground. I know what real life is, and I’m not going to believe in the not real. I know what’s true and what’s not. If I have to play the game, I play the game, but I’m never confused.”

That sounds like something a future ex-wife of Tom Cruise would say, don’t you think?

So what do you think of a Tom Cruise/Olga Kurylenko hook up? Take a look at this pic. She really looks like Angelina Jolie doesn’t she? And she has a major attitude in interviews. There’s nothing sweet about this girl. It’s all about the sex appeal. Can Tom control that? It would be very interesting and super fun to watch!