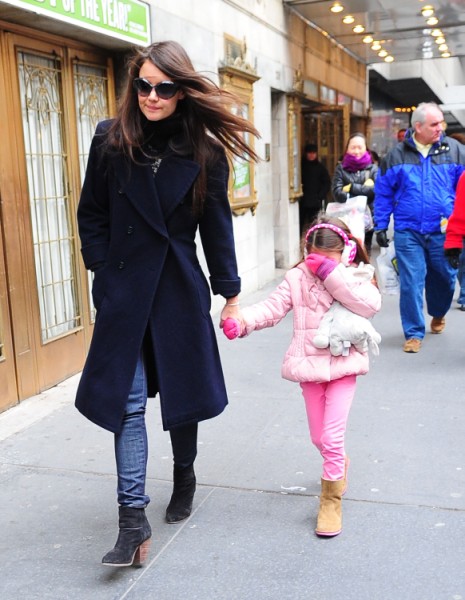 Hang on to your husbands ladies, Katie Holmes is on the prowl. Just seven months after plotting her heroic and death defying escape from Tom Cruise, Katie is ready to make love happen again. The only problem (if you believe The Sun) is that she can’t quite make it happen on her own. She’s looking for some help in finding a new  man but is reluctant to get matched up by friends so she’s going to the professionals. No, it’s not Match.com. The former Mrs. Cruise has hired a dating coach. Katie Holmes is racking up flirting tips and relearning how to approach people in an effort to regain some of the confidence she lost since her marriage failed.

Seriously Katie? Tom must have really done a number on her because the only dating tip you need when you look like that is to just show up. Men will flock if you are anywhere. Or can it really not be that easy for the new face of Bobbi Brown cosmetics? Has Tom’s tarnished image rubbed off? We thought Katie got away free and clear but maybe she’s still feeling some Xenu after-effects. You’ve got to wonder about a girl who let Tom Cruise knock her up (Nicole Kidman didn’t even go that far). And then there was the six years of robotic behavior. Is Katie the kind of girl that fits her personality to match whoever’s into her at the time or does she actually have a personality of her own? And then, probably the most compelling repellent, is the fact that she’s linked to Tom Cruise for the next 12 years or so. The two (or their people) need to work together to coordinate all of Suri Cruise’s events and holidays. If you were a dude would you want to be that close to Scientology’s top guys especially in light of the new book out. Tom’s crazy pants! You think he’s just going to shake Katie’s new boyfriend’s hand and walk away. Please. I’d be looking over my shoulder every time I left my room.

So, I’m just saying. There might actually be valid reasons for Katie Holmes’ confidence to be so… low. It’s got to be lonely to be the woman who almost took down Scientology. She’s got a couple movies coming out and she’s supposedly trying to star in a new TV show. That’s a start. If Katie goes back to what she was doing before she ever met Tom maybe we’ll all forget that lapse in judgement. Probably not but, like I said, it’s a start!

What do you make of the idea of a dating/confidence coach? Katie Holmes could do worse, right? She could still be using a Scientology coach.