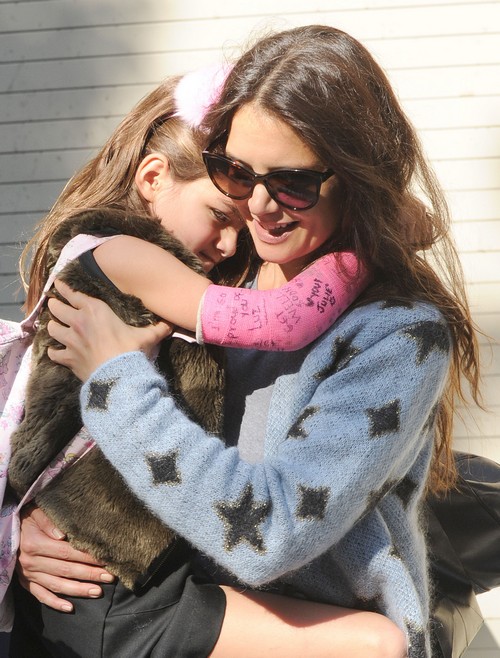 According to an exclusive article on RadarOnline, the reason Tom Cruise and Katie Holmes divorced was Scientology. We can all exhale now. We probably all suspected, but now we know, and we can finally sleep at night.

Katie surprised Tom with shiny new divorce papers in 2012 and rumors surfaced that she feared Suri would be required to join SeaOrg, Scientology’s own naval operation, complete with cultish harshness, isolation, and mind control. In order to ensure her daughter’s safety, Katie took Suri and ran.

On September 9th, Tom gave a 36-page deposition where, in typical Tom fashion, he hemmed, hawed, and otherwise tried not to answer questions directly, yet still laid bare the main reason his third wife secretly involved her lawyer father in the planning and execution of her escape from Tom’s life, home, and religious cult.

When asked if Katie fled without looking back in order to “protect Suri from Scientology,” he responded angrily with, “Listen, I find that question offensive. I find it, those statements offensive. Like with any relationship, there are many different levels to it. You know, I, I find it very offensive. There is no need to protect my daughter from my religion.”

Interesting he says that—well, tries to. There is a lot of stammering going on, isn’t there? At any rate, there are several people who run web sites, some of whom are former members of Scientology, who believe otherwise.

When lawyers asked, “And Ms. Holmes has never indicated in any way that was one of the reasons she left you? …To protect Suri from Scientology,” Tom agreed it was one of Katie’s assertions and that Suri is not practicing Scientology.

Suri is, according to Scientology’s belief system, now a Suppressive Person and should, “lose both his or her fellowship with the Church as well as with other Scientologists.” That means she should actually be forbidden to have contact with Tom at all and vice versa.

The lawyers asked Tom, “Would you consider, would the Church consider Ms. Holmes to be a suppressive person upon leaving the Church?”

Ok, show of hands—how many are impressed Tom was able to use those multi-syllabic words correctly? Wow!

When Tom was shown proof of the definition of the term, ‘suppressive person,’ he admitted it was correct. Poor Tom. He is so blinded by his devotion to his cult that he can’t see the forest for the trees. Obviously, he finds aspects of it ridiculous, hence his being quick to anger when confronted with doctrines he lives by and promotes.

The deposition came about because Tom is suing Bauer Media, which publishes In Touch magazine, over a cover story called, “Abandoned by Daddy,” which states Tom has abandoned his youngest child.

“I mean, come on, that is absolutely disgusting,” Cruise exclaimed about the cover. “Listen, I am a public person… I tolerate a tremendous amount, and I’m very privileged to be able to have the life that I have… But there is a line that… I draw for myself, and that’s it.”

Poor Tom. Mimi Rogers jilted him (but remains in the cult), he and Nicole Kidman split, Katie and Suri pulled up stakes, and his daughter, Isabella, went nose to nose with him over Scientology. His popularity started circling the shame spiral drain during his courtship with Katie, what with the couch jumping, and over-the-top PDAs, and all. Even without everyone saying, “Ew, he’s a spazzy, weird cultist,” all of his antics that “proved” how “in love” he was with Holmes really didn’t help his image, and now he’s got a magazine saying he abandoned his child. Will he ever recover? Will we?

While I feel relief to finally know what drove that final nail into their divorce coffin, I am also fully aware there will be some new batch of antics from Cruise and Co. that will cause me to bite my nails again until I get the answers I so desperately seek, and when those antics break, you, dear readers, can rely on Celeb Dirty Laundry to provide you with the details.