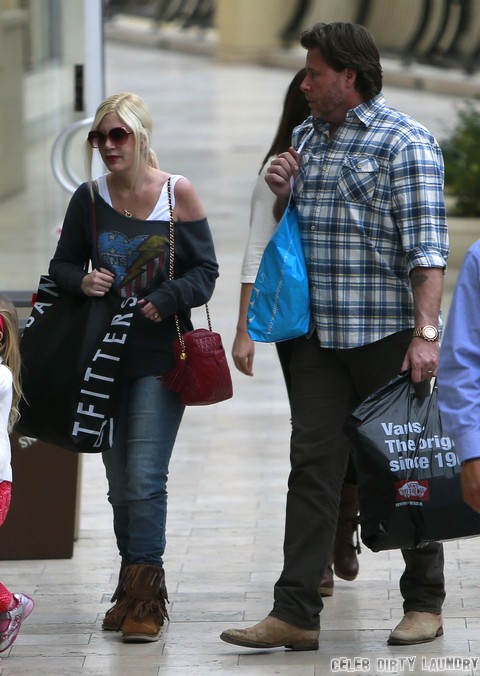 You can always tell the amount of stress that Tori Spelling is under by how skinny she is. When the rumors are swirling and the press is bad, she is all skin and bones and that’s exactly how she has appeared in recent photos. Supposedly Tori and her husband, Dean McDermott have been having some serious problems in their marriage that she has vehemently tried to deny. According to the April 8th print edition of Star Magazine the stress is evident, no matter what Tori says, and we can see this by her protruding bones.

The mom of four prides herself on family and has really built an entire brand based on family life. The last thing she needs is to have to admit to the world that it’s a lie or that things aren’t exactly as they seem. At the root of many problems supposedly is Dean’s sex addiction and infidelity. Things may get chilly behind the scenes but Tori refuses to acknowledge that their marriage is anything less than perfect. Instead she resorts back to her long standing, eating disordered ways and doesn’t take proper care of herself. She chalks up being super skinny at times to forgetting to eat because she’s so busy with her kids, but I think it’s a bit more than that. Tori is a small woman but only looks sickly when the stress is heavy. Back in the 90’s, during her 90210 days Tori mentioned the excessive pressure to be skinny in Hollywood and that’s clearly a stress that never goes totally away.

Do you think that Tori’s appearance gives a better indication of what’s happening in her life than maybe her words do?  Do you think that she has had an eating disorder for most of her life? Tell us your thoughts in the comments below.