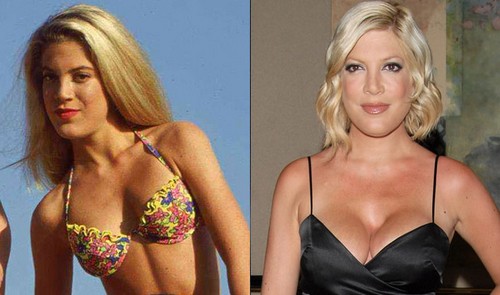 Tori Spelling’s life is a mess. Not only was she hospitalized for anxiety after she dissed Katie Holmes in her memoir, but she also lost all of her Hollywood pals when they were forced to sign waivers for her ex-reality television show.

Spelling allegedly invited friends like Lisa Rinna, Brooke Burke-Charvet, Ali Landry and RuPaul to her children’s birthday parties, but once they arrived at the venue they were asked to sign release forms for on-camera appearances. A source told RadarOnline, “It’s no secret that Tori throws her kids over the top birthday parties. When [the guests] arrived, before entering [Tori’s] home, they would all be asked to sign release forms for the reality show. Few were given a heads up before the event and they would be blindsided upon arrival.”

The parties were almost always sponsored, so Spelling’s celebrity friends had to pose for fake photo shoots with the sponsored product. Spelling basically used her friends to increase the “celebrity factor” on her show, but it wasn’t enough. Oxygen cancelled Tori & Dean: Home Sweet Hollywood this year because Spelling was boring and lame and no one liked her anymore.

A source revealed, “Tori’s celebrity friends thought they were just going to a child’s party and didn’t expect to be on camera. It just didn’t feel like a toddler’s birthday party when there were so many cameras present. Naturally, guests couldn’t relax and be themselves. In the end, it’s no mystery why Tori’s parties have been very low on celebrity turnout!”

“Viewers wanted to see Tori interacting with her celebrity friends and throwing these outlandish parties. If they were not attending, there was much less appeal.”

A failed reality show was only the cup on the Tori Spelling cake. Her recently published memoir, Spelling It Like It Is, sent shockwaves through Katie Holmes’ ten-person fan club when the book revealed a very awkward, very bitchy moment between the two embattled stars. The fallout from this acerbic tome sent her to hospital for anxiety. Parts of her book tour were also cancelled when Captain Sadhands missed a scheduled flight.

Luckily Khloe Kardashian pitched up at a book signing (she was the only one), because she thought the book was a self-help alphabet encyclopaedia. (We’re joking)