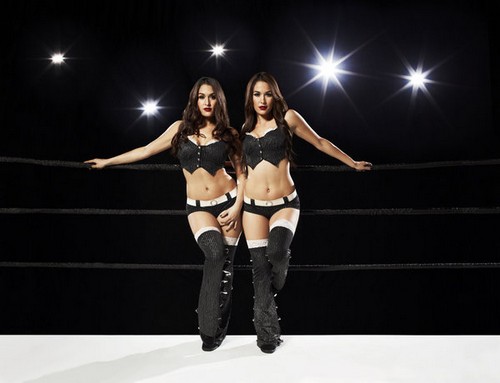 Tonight on E! TOTAL DIVAS continues with a whole new episode called, “Diva Las Vegas.” On tonight’s showVincent has another outburst in front of her coworkers.  Did you watch last week’s crazy episode?  We did and we recapped it right here for you.

On last week’s episode Trinity and Ariane’s conflict escalated to the point where they could get fired; Nikki reunited with her estranged father and Nattie’s friend, Jaret, confessed feelings for her.  The Funkadactyls went go out go-cart racing with Eva Marie and JoJo on their day off, which led to a huge argument because Ariane is…Ariane.

On tonight’s show the Divas & several WWE superstars go to Vegas for Nattie’s bachelorette party. JoJo’s friends warn her against dating a much older Justin Gabriel; Ariane is furious when Vincent has another outburst in front of her coworkers.

RECAP: Jojo thinks Justin Gabriel is so hot and she mentions it to Chris Jerricho who says she has a crush on him. Brie thinks Brian is the best man in the whole wild world and is bragging about him. Jojo misses Sebastien who was the love of her life, but thinks she should just move on. Eva Marie think Jojo is single, but not ready to mingle yet.  Eva and Jojo want to have a house warming party and invite Justin.

Nikki wants to plan a bachelorette party in Las Vegas and promises Nattie to keep it PG-13. Nattie shares with the girls that she had dinner with Jarred and he told her that he was in to her; the girls are shocked. Nattie tells them she is looking forward to some girl time.

It’s time for the housewarming party and people are starting to arrive, Jojo answer the door for yet another person and it is Justin. Everyone starts to have a good time and the girls are discussing Justin. Jojo grabs Justin by the hand and takes him out on the balcony where they share their first kiss. All the girls are looking on and Eva is worried about her because she is nineteen and doesn’t think their two worlds mix.

Jojo and Justin go on their first day, it looks a little awkward but Jojo thinks they are having a great conversation.

In Tampa, Florida, John and Nikki are shopping for Nattie’s bachelorette party. Nikki tells John that Nattie has only slept with TJ, he says so what as long as they are happier.

At Ariane’s apartment, she is with Vincent and packing her stuff to go to Las Vegas. Vincent is a little jealous that he is not going to Vegas and she tells him that nobody’s boyfriends are going. The two get into an argument and he tells her that she could make time for him if he were to go.

The girls are in Vegas and Arianne lied, the guys are in Vegas with them. Jojo is so happy that Justin is also in Vegas, she thinks they could make beautiful babies together. First their is a pool party and everyone looks amazing. Jon tells Trinity that she is the best looking one at the pool.

Nikki and Nattie are at the pool and Jared sends her a text, he asks her if she is getting lap dances yet. Nikki cannot believe how flirty Jared texts are; he even says that he will be thinking about her in his dreams. Nattie asks Nikki not to mention this to Brie or anyone else.

The girls are on their way to see the Chippendales, Nattie is in store for the night of her life. Jojo is frustrated because she is not 21, she can’t drink and she can’t gamble. Jojo goes out for a walk with Eva and they see Justin out with some girl. Jojo is furious and can’t believe that Justin would do that; he actually bounced in the cab with the girl right in front of them. Eva feels sorry for Jojo but she is in infactuation stage and they all warned her that he is probably not serious.

Back to the girls night out, the girls are really getting drunk and Brie is in full effect. Nikki is so drunk that she has fallen down and Brie is having a blast. The girls return to the suite and Nattie reveals that she cannot get Jarred out of her mind. Brie thinks she has to have a one on one with Nattie and make her realize what she has. Nattie says she wanted to have this fairy tale wedding but she is not so sure any more. Brie says just because TJ is not making her feel like she is it right now, doesn’t mean that she should be doing what she is with Jarred.

Brie has to sneak into her room and try not to wake up Brian, but she doesn’t have her keys and knocks on the door. Brian has no idea that she is in Brie mode and it happy about it. Brie has fuzzy handcuffs and starts putting them on Brian.

The next day, Brie’s head hurts; she admits to Brian that she got into Brie mode the night before. Brian says that he already knew that, he doesn’t like it, but it was Nattie’s party.

Everyone is dressed up and join each other for dinner; Jojo is sitting right beside Justin and he is texting non stop. Jojo is so confused because he choose to sit beside her, then he spends some alone time with her and admits that the age gap between them is too much for him and although he thinks she is beautiful, he can’t get past that.

Ariane tells Trinity that her boyfriend hopped on a plane and he is on the way there; all of sudden there is a knock on the door and Vincent is there. Ariane is excited to see Vincent but his energy is on a 20 and she thinks he needs to calm down a bit.

This is the final night of the bachelorette party and everyone heads to Simon to celebrate. Nattie gets a cake and it is male torso, she goes right for the wiener and when Ariane goes to share some Vincent freaks out. Then there is cotton candy at the table and Vincent starts acting like a real idiot and Ariane does not look happy. After dinner everyone heads out to Ghost Bar to dance the evening away. Vincent is drinking and drinking and Ariane is getting really upset because she thinks he has had three too many. Brie sees the two fighting and is totally zoomed in on it and can’t believe how much he is drinking. Nattie is surprised at how strange Vincent is acting. Ariane starts to freak out because Vincent spilled a drink on her, Trinity can’t believe how the two are acting and thankfully, they both leave. Ariane does not want to be further embarrassed, she just wants so out of there. Nattie is having a blast, she is so happy despite the road bumps.