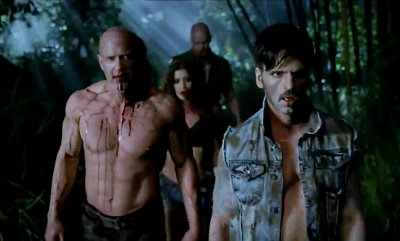 So, the season 6 finale of True Blood happened on Sunday evening and a lot of things went down; however, let’s just say some of those things weren’t as exciting as we’d hoped. This season was my least favorite season so far, primarily because of the Billith situation and the constant blah-blah-blah fairy babble. If you missed the episode, CDL recapped it for you here.

The finale, while fun and (almost) lighthearted, sort of left me hanging and wanting something a lot more epic — not just a bunch of vamps dancing in the sunlight playing volleyball. What about you? Did you love the season 6 finale — or did it leave you wanting something more as well? WARNING: This post contains spoilers.

The episode did have many charms and LOLz (remember when Bill tried REALLY hard to move that glass cup with his mind?), but ultimately it just felt like a mid-season episode. For me, the episode’s redemptive moment was the exchange between Tara and her mother at the awkward human-vampire mixer hosted by Arlene.

The mixer encouraged Hep-V free humans to let themselves be fed on in exchange for vamp protection and Tara’s mother, recognizing the fact that she’s neglected/rejected her child in every possible way, offers her blood to her daughter. It’s awkward at first, true. But when you think about it, the act is quite tender and motherly, and definitely shows Tara’s mother overturning a new leaf. She’s notorious for being unaccepting of, virtually, every life form on the planet. So allowing a vamp to suck her blood is, well, a ginormous step in the right direction for her.

Now, the thing that’s probably on everyone’s minds . . . . Is Eric really dead? We saw him resting naked in a lawn chair on a snowy Swedish mountain while reading a novel (as one does), but as the fairy blood in his system began losing effect, he burst into flames. We didn’t see the outcome of this. I think it’s safe to say that Mr. Northman will make it out alive. But you never know . . . . What do you think? is Eric dead?

All-in-all, several story lines have been set up for season 7: Jason’s new vampire love; the new human-vampire Bon Temps pact, instigated by Bill and Sam; Bill’s desire to get back in Sookie Stackhouse’s life (complicated by her new relationship with Alcide); the future of Pam and Eric (are they alive?); the Hep-V epidemic; and, as suggested by the cliffhanger, the arrival of crazed vampires in Bon Temp. They appeared to be infected with Hep V — which seems to have turned them into some type of *brace yourselves* zombies.

Let us know what you thought about this episode in the comments section below. We’d love to chat with you!