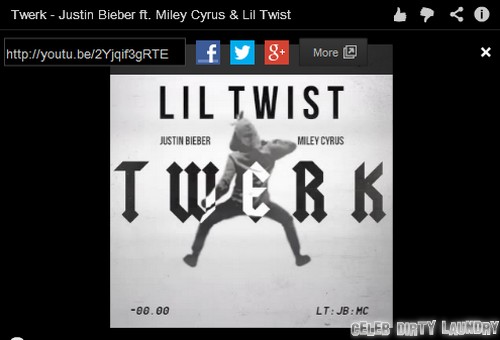 A new song has just leaked and it could not be more appropriate in the aftermath of what Miley Cyrus did at the VMA’s. The song is called ‘Twerk’ and it’s by Lil Twist featuring Justin Bieber and of course, Miley Cyrus; how suspicious that this would get leaked just now.

The song is your generic club song that has that instrumental that will make you say, “I’ve already heard this before.” It’s incredibly generic and plain bad; it’s way too simple and you could produce nicer music with some pots, pans and a couple of spoons. I’m guessing Lil Twist produced the song because I can’t hear him anywhere in the song – which would have only made it much worse.

Miley Cyrus sounded so annoying in this song – all she says over and over again is; “I came up in this party, time to twerk!” Her voice is forced so badly, I just wanted to blow my eardrums up. First the VMA’s and now this song…. Billy Ray Cyrus must be so embarrassed and disappointed by his daughter. Many people say she’s just growing up, but that is no excuse to act like such a whore – it’s disgusting.

Justin Bieber tries way too hard to sound manly but he’s failing to be seductive. It’s just hilarious, this song is great proof to how pathetic his “singing” skills are – that’s if we can even call it singing.

This song is by far the worst thing I have heard in 2013, it’s music like this that makes me just cry for the music industry and the piece of crap it’s become in the recent years that have passed.