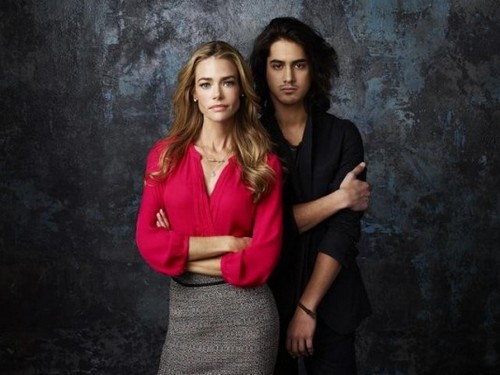 Tonight on ABC Family TWISTED continues with a new episode called, “Three for the Road.” On tonight’s show Kyle is determined to track Jo down, and Karen and Tess bond over an impromptu pottery lesson. Did you watch last week’s show? We did and we recapped it here for you.

On last week’s show the residents of Green Grove celebrated the town’s annual Fall Festival and Lacey discovered a secret about Regina that could shed new light on the murder investigation.

On tonight’s show Danny, Jo and Lacey go on a road trip in order to uncover new clues to Regina’s murder.  When new evidence in Regina’s murder mystery points to Connecticut, Danny, Jo and Lacey decide to hit the road, without telling their parents. The trip could well end in disaster: Jo and Lacey are at odds, with Danny struggling to play peacemaker, and Danny is blatantly violating his parole by crossing state lines. Meanwhile, Kyle is determined to track Jo down, and Karen and Tess bond over an impromptu pottery lesson. Joe Lazarov directed the episode written by Executive Producer David Babcock.

Lacey wants to play it safe still. She doesn’t want to the evidence to the police because she doesn’t want the police to think about her dead friend. But Jo isn’t cutting her any slack. She suspects Lacey will drag her feet about this then she’ll only continue. Danny wants Jo to cut Lacey some slack but he’d be lucky if she tried.

Back at the Desai house, Danny asks his mom what she did with the necklace. She tells him she got rid of it. Danny said the necklace was left for him and he was going to use it to find out the real killer. Karen doesn’t really believe him but tells him that it’s good that necklace is gone.

Jo finally remembers her friend Rico. He now knows what Karen but when the opportunity is presented he doesn’t her what he saw. Although he now suspects Danny of killing Regina; he lets Jo believe he’s still innocent.

Danny, Lacey, and Jo want to find proof of Regina’s mysterious boyfriend but Jo’s dad catches her in a lie. He knows she’s not meeting up with Rico and forbids for leaving the house. Does that stop her? No. She just decides not to tell Danny and Lacey she never got permission for their little road trip.

Karen stops by Jo’s house. She wanted to pay Tess for Danny’s pottery class but what she finds out is that Jo snuck out of the house. Karen mentions how Danny had plans with Lacey and Jo. Kyle is of course furious and he leaves to try and find her. He goes to Rico for help but Jo catches on. Right before he leaves, Rico tries to tell him about Karen yet he chickens out at the last minute.

The proof finding road trip isn’t as fun as it sounds. Lacey and Jo can’t help snapping at each other. So Danny devises a plan. He gets them pull over and then locks them out of the car. They can come back after they make up. They grudgingly apologize and the trip is back underway.

Rico goes to Jo’s dad. He hasn’t built any courage yet but he’s working up to it. His nervousness nevertheless makes Kyle suspicious and he sweet talks Rico into staying at the police station. After a while Kyle tells Rico to do the right thing. Especially if it could potentially hurt Jo in the end. Rico still doesn’t tell him. He runs off.

They find the address where the letter came from only to run into another stumbling block. The security guards won’t let them up to the apartment. Leaving the building the two girls get in another argument and it comes out where the rift began. Lacey had asked people to cut Jo off because she was too depressing after what Danny did.

Karen and Tess had begun to bond again. They even smoke pot together and were laughing about their high school days when it all goes wrong. Tess got too high and admitted to sleeping with Karen’s late husband back in high school. It was around the same time Karen was dating him. Whatever friendship they had rebuilt came crashing back down.

Danny refuses to give up on the mysterious sender. He plans to sneak back in the building. During the time he’s gone, Lacey apologizes for real this time to Jo. They shouldn’t have abandoned each other. They go inside to see if the security guard is gone, at the moment he’s busting Danny, and Jo decides to take advantage by using the guy’s computer to search the building directory. The person listed is Danny’s dad, Vickram.

Danny is with the security guard. The guy is calling the cops to report him and he sends a text to the girls about what’s going to happen. They get to the office in time. They worked up a story about Danny believing with a woman in another apartment. They get him out in time but this time he’s the one that’s angry. He risked Juvie for nothing.

Karen returns to Tess’s. She says she’s sorry. Her marriage wasn’t perfect but what happened took place a long time ago.
Rico returns to the police station and he tells Kyle he saw Karen throw a necklace off a pier.