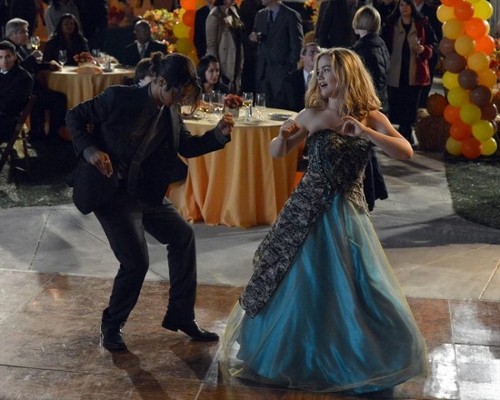 Tonight on ABC Family TWISTED continues with a new episode called, “The Fest and the Furious.” On tonight’s show Lacey discovers a secret about Regina that could shed new light on the murder investigation. Did you watch last week’s show? We did and we recapped it here for you.

On last week’s show Lacey’s mom Judy invited Jo to a sleepover, much to Lacey’s dismay. Despite the promise of an incredibly awkward evening, Jo seized the opportunity to get closer to Regina’s friends and uncover potential evidence that pointed to another suspect in her murder. Tess persuaded Karen to reconnect with her old friends, only to have it end in humiliation when Regina’s mother Gloria viciously confronted Karen about Danny. Meanwhile, Danny had his first soccer match and struggled to stay on civil terms with Archie and his teammates, and Kyle stepped up his investigation.

On tonight’s show the residents of Green Grove celebrate the town’s annual Fall Festival and Lacey discovers a secret about Regina that could shed new light on the murder investigation.

Jo is having breakfast with her family when her mom mentions tonight’s festival. Jo feels like she’s too old for that and her dad is hoping Danny feels the same. Kyle still feels Danny killed Regina despite not finding the necklace at his house. Jo wants him to think about who gave Regina the necklace and her mom agrees with her. Still Kyle is focusing in on Danny while claiming he’s tracking the new lead. He just wants his family away from the Desais.

And more importantly to back him. Later when he’s standing in front of a town council, people are openly questioning why he let his daughter hang out with a killer. They want to band Danny from the festival and they don’t care anything about Danny’s rights.

Jo just wants everyone to give Danny a chance. When they’re at the pizzeria they even begin to talk about all festivals before the whole him killing his aunt. His therapist also advised him to go. Lacey doesn’t want him to go. She thinks it would be selfish. However after learning about the necklace’s origins she wants some answers herself. She asks Regina’s mom about the necklace only to find out it was gift someone had given. Although Lacey does offer Regina’s mom some help in sorting out the condolences letters. Who knows what she’ll find.

Danny is helping the pie stand at the festival. Rico wanted some help but technically he only wanted Jo’s help. He upset and sulking when a man starts in on calling Danny names. A woman comes to his defense by trying everyone he’s still just a kid yet when Danny ‘s hand touches the guy, the guy throws him in the pie stand. Sheriff manages to end the conflict.

Rico is still angry and when Jo mentions how they can have fun at the formal; Rico is angry that now she wants to go. For Danny.

Danny is getting more pies when he run into the sheriff. Kyle offers to carry the pies back to Rico and then he tells Danny it would be for the bet if he didn’t attend the formal tonight. Jo would be the better for it.

Danny’s mom, Karen, doesn’t trust her son either. At least not anymore. Earlier she was nervous when her son was cutting up his fruit. She also tried to catch him by saying she was giving away his dad’s chair. Now she’s visiting his therapist. Karen hid her concern from the doctor by asking what a sociopath is so that she can explain why Danny isn’t one. The truth She really wants to know whether her son is a sociopathic killer. But how will that affect their relationship.

Lacey is going through the mail like she promised and she finds a letter that appears to be responding to blackmail. Hundred dollars bills included with a note that says it’s the final installment.

Jo had changed her mind about going after Danny said he wouldn’t but her mom, who always wanted to see her in a dress, convinces otherwise. Jo is decked out in a dress on Danny’s doorstep doing her best to get him to come with her. Danny is getting dressed when his mom helps him with his tie. He thanks her and she tells him she’ll always help him.

Lacey is at the formal. She is at a semi-memorial for Regina when she sees Regina’s mom. They talk for a little bit but Regina’s mom is still too sad to want be in a crowd.

Jo and Danny arrive for the festival and then have to face her dad and the mayor trying to kick Danny out. But to do so would be the front page for tomorrow’s paper. The kids are allowed to stay. Nevertheless the mayor takes it too far by getting Danny to participate in events. People started to leave.

The mayor isn’t too happy. He feels if Kyle had done his job then he wouldn’t have had to play nice with Danny. Kyle is too ticked off to accept enjoying the evening and ditches his wife.

Danny and Jo are dancing close together. Rico sees them and that’s when it finally hits. Jo won’t ever see him with Danny around. He leaves before seeing Danny rush off the dance floor. Lacey sent him to a message. She gives him Regina’s letter but doesn’t want to go to the police. She can’t ruin the memory of her friend. Danny is upset and he’s also upset that she’s only willing to meet him in dark corners. That is when it happened the kiss. Lacey kissed him but when she broke it off and was about to walk away, Danny kisses her.

Jo sees Rico and invites him to the pizzeria. He snaps. He confronts Jo on how does he know she can even trust Danny. Is it the truth or is it plain jealous. Confrontations aren’t over. Kyle demands explanations on why Danny is taking his wife’s class. She defends herself by saying he can’t find any proof Danny killed Regina and also their daughter is the happiest she’s been in a while.

Danny and Lacey take the letter and show it to Jo.

Karen has gotten rid of the necklace. She threw it off a pier but what she didn’t know was that Rico saw. The same Rico that wants Danny away from Jo.