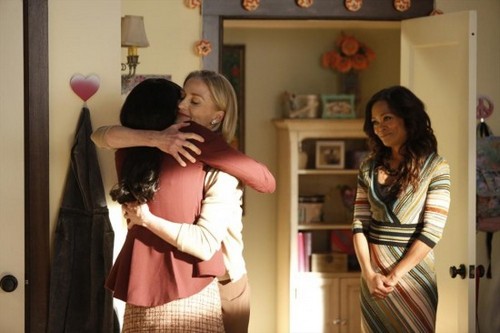 Tonight on ABC Family TWISTED continues with a new episode called, “Sleeping With The Frenemy.”  On tonight’s show  Jo is invited to hang out at a sleepover with Lacey, Sarita and Phoebe, and Karen has a run-in with Regina’s mother.  Did you watch last week’s show?  We did and we recapped it here for you.

On last week’s show Jo hoped to uncover new clues by shaking up her routine at school and getting to know Lacey’s friends  Rico and Jo figure out that Archie lied about being at home the night Regina died. Jo’s dad found a picture of Tara wearing the necklace.

On tonight’s show Lacey’s mom Judy (played by Robin Givens) invites Jo to a sleepover, much to Lacey’s dismay. Despite the promise of an incredibly awkward evening, Jo seizes the opportunity to get closer to Regina’s friends and uncover potential evidence that points to another suspect in her murder. Tess persuades Karen to reconnect with her old friends, only to have it end in humiliation when Regina’s mother Gloria (played by Jessica Tuck) viciously confronts Karen about Danny. Meanwhile, Danny has his first soccer match and struggles to stay on civil terms with Archie and his teammates, and Kyle steps up his investigation.

Jo goes to her dad with a new suspect but completely ignores her because he feels like he has the true culprit in sight, Danny. As matter of fact he just got word about a search warrant.

Karen is nostalgic about Danny’s childhood. He’s about to try out for soccer and she can’t help remember how Danny loved watching sport with his dad. Danny’s memories however don’t appear to be as cheerful.

Lacey is starting to guess thing too. She ask Archie about his excuses only to find that certain things aren’t making sense.

Jo wonders if Danny is nervous. He’s macho; he’s not going to admit to that. But they have to focous. Danny could use practice to ask around about Archie. How he’ll work that into a conversation is up to him.

Jo’s mom, Tess, runs into Karen at the supermarket. She tries to play nice with Karen. But Karen is skittish and quickly leaves after she notices the stares and whispers.

Jo runs into Lacey and if the situation isn’t awkward enough she also sees Lacey’s mom. Judy is all good cheer, she claims divorce does that, when she ask Jo over for a sleepover with Lacey. Lacey implies that wouldn’t interest Jo and out of spite, takes up the offer. The girl who stated earlier she didn’t female friends is now going to a sleepover.  Later she’s preparing for the sleepover by buying snacks with Rico. Rico makes fun of her girly things and Jo suggests he should hang out with Danny. He’s never done that by himself. What will they do?

Lacey is planning her sleepover when Regina’s mom, Mrs. Crane, comes by with some of Regina’s things. After Mrs. Crane leaves Judy apologizes for inviting Jo but reminds Lacey that used to be her best friend.

Danny does really well at practice but Archie isn’t too happy about that.

Jo is worried about what to wear. Tess does her best to instill confidence in her daughter but the point she enters Lacey’s room; Lacey’s friends tear into her outfit. Phoebe and Sarita  are going through the food while Jo makes an cringe worthy conversation with Lacey. Somehow or another Jo accidently called Judy a slut.

Tess goes over to Karen’s to  invite her to a committee meeting. She reassures Karen that it won’t be bad. Karen agrees to think about it. Later Tess tells her husband about inviting Karen. She didn’t know that her husband got his search warrant and wanted to know when Karen would be out of the house.

Rico and Danny hanged out at the pizzeria. They do their best to have fun and there are moments that Rico acts a little too geeky. However someone else had the same idea as them. The soccer team come into the pizzeria. Danny stopped by their table with Rico. Archie of course mocks him but Danny lets it slide off his back.

Back at the sleepover, Sarita has a sour face because Jo is getting along with Lacey.  Jo on the other hand notices Regina’s box. Jo does try to go near the box and ends up almost getting caught by Lacey. The two girls bond and talk into the night. By the next morning, Jo is searching through Regina’s box. She finds a DVD with Archie on it. She takes the vid but doesn’t notice that Sarita saw her.

Regina’s mom decides to come to the charity luncheon. She sees Karen and hugs her. But she’s uncomfortable. Karen goes to speak to Gloria afterwards only to find out that Gloria does blame Danny and is currently asking the Board to kick Danny out. She also will be pushing to see Danny jailed. Karen makes the wise decision to leave early.

Danny and Archie comes to a truce on the field. Lacey, Rico, and Jo are in the stands. Jo tells Danny about what she found and Sarita tells Lacey about Jo. Lacey gets in Jo’s face and demands to know what she took. Jo explains her suspicions and Lacey storms off angry.

Archie makes everyone lose the game. The truce ended real quickly. In the locker rooms, Danny decides to confront Archie over his alibi in front of everyone. Archie tells his squad he was looking into transferring to another school because of the other school’s athletic team. Now his squad is angry at him for trying to ditch them. He tells Lacey soon after.

Danny returns home to find the cops finishing up their search.  Tess comes by after the cops had gone. She volunteers to help Karen clean up but Karen politely declines.

Lacey and Jo talk for a brief moment. They still miss each other but can’t seem talk to each other.

Danny finally tells Rico and Jo about Regina wearing his aunt’s necklace. He knows it look bad but vehemently claims he didn’t take the necklace. While over at his house, Karen finds the necklace in her late husband’s chair.