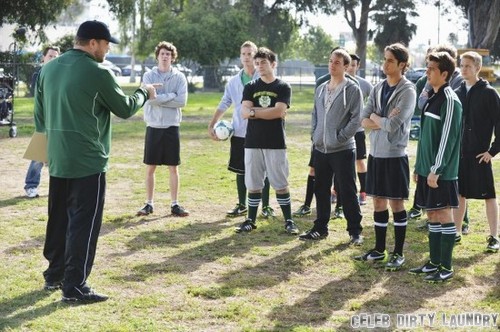 Tonight on ABC Family TWISTED continues with a new episode called, “We Need to talk About Danny.” On tonight’s show Secrets are revealed when Danny, Jo and Lacey attend a party at Green Grove Cemetery.  Did you watch last week’s show? We did and we recapped it here for you.

On last week’s show Danny, Jo and Lacey went on a road trip in order to uncover new clues to Regina’s murder.  When new evidence in Regina’s murder mystery pointed to Connecticut, Danny, Jo and Lacey decided to hit the road, without telling their parents. The trip could well end in disaster: Jo and Lacey were at odds, with Danny struggled to play peacemaker, and Danny was blatantly violating his parole by crossing state lines. Meanwhile, Kyle was determined to track Jo down, and Karen and Tess bonded over an impromptu pottery lesson. Joe Lazarov directed the episode written by Executive Producer David Babcock.

On tonight’s show When Phoebe’s brother Tyler (played by Chris Zylka) holds a party at the cemetery, Jo and Lacey press Danny to reveal the secrets he’s been keeping and end up spilling one of their own. Danny suffers the consequences of a mishap on the soccer team and Lacey defends Danny against Archie’s increasingly vicious verbal attacks. Meanwhile, Rico confronts Jo about her obsession with Danny’s case. Karen fails at a job interview, and Kyle seizes an opportunity to win her trust. Chris Grismer directed the episode written by Brian Studler.

Tonight’s episode looks like it is going to be great and you won’t want to miss it, so be sure to tune in for our live coverage of ABC’s  Family ‘s “We Need To Talk About Danny” at 9:00 PM EST! While you wait for our recap hit the comments and let us know what you think of season 1 of Twisted, so far?  Also, check out a sneak peek of tonight’s episode below!

The Jo, Lacey, and Danny love triangle has gotten worse. Other people namely Archie is noticing Lacey snapping with him and defending Danny. Then there’s Rico. Whose so caught up in his own jealousy, he actively striving to have Jo suspect Danny of murdering Regina. As he said watching her not having a crush on Danny is painful.

Jo is just starting to realize she even has a crush. Right now she’s only at the sex dream faze. Anyway Danny hasn’t been open with her as much as she would like. For instance he still hasn’t explained why he killed his aunt. But if he won’t tell her, Jo suggest Lacey ask him. Maybe that help clue them in on how Danny’s dad was involved with Regina.

But they really have to start being careful about conspiring together. People will think they’re friends. Something Lacey will deny almost to the extreme in front of her real friends. Mainly in front of Sarita.

Danny doesn’t reveal anything to Lacey. However he’s going to need someone to lean on now. His only friends besides the girls happen to be a rival of his on the soccer field. Danny appeared not to take it seriously yet when his friend comes down with a quick bout of food poisoning; all of his other teammates suspect him. The coach also finds moth balls in the locker room. Mothballs can cause food poisoning and because Danny and his friends were alone, he’s the number one suspect. The coach has no choice but to remove him from the team.

Jo ends up getting invited to a party. At a cemetery. Danny can only go if she does so she’s going and Rico is angry. Jo sneaks out PSAT Prep and goes to the party only to find Archie. What’s worse than Archie? A drunk Archie. When things begin to look like a confrontation, Jo pulls Danny away. She and Lacey are going to demand answers especially now that he’s vulnerable.

They begin questioning hi but he refuses to answer. That’s when the girls drop the bomb about his dad being involved with Regina somehow. And to top it off they tell him how they suspect his dad’s accident might not have been an “accident”. He’s so angry with them he storms off and Jo runs after him.

Danny says his Aunt Tara had something that could destroy his family that’s why he did what he did. As for his dad, the only reason he’s upset now about the soccer thing is because that was a way to feel close to his dad. His dad had stop visiting him years before he died. He doesn’t know about anything between his dad and Regina. What he does know is that he wants to protect Jo from some ugly family truths.

Sarita, after being suspicious the entire time, confronts Lacey about her new friendships. Sarita issues an ultimatum. She won’t tell anyone what Lacey has been up to but Lacey does have to choose between them. Lacey goes back to where Jo and Danny were and finds out Jo had to leave because of curfew. She sees Danny upset and hurting and tries to comfort him. This leads to them nearly having sex in the cemetery before Lacey puts a stop to it and leaves. But did she see how they almost had sex on Danny’s Aunt Tara’s grave?

Jo is at home when her mom sees her and figures out something is wrong. Tess asks her about it and Jo admits she might be in love with Danny. Tess doesn’t warn her off although she does tell Jo to be careful.

Kyle feels the only way to get Danny is try and get on Karen’s warm side. He’s going to try and befriends her. He gets lucky by finding Karen in the dumps. She had recently tried out for a job and got rejected. The two end up bonding and even shared a laugh together.

Danny returns home and seeing the good mood his mom is in he decides not to ask about Regina. In other good news from their meeting, Kyle apologizes to his wife. Karen helped him remember to think about Tess’s feelings. Nevertheless when Kyle’s people find the necklace, he can’t help smiling.

Lacey did make a choice. She chose Danny over Archie.