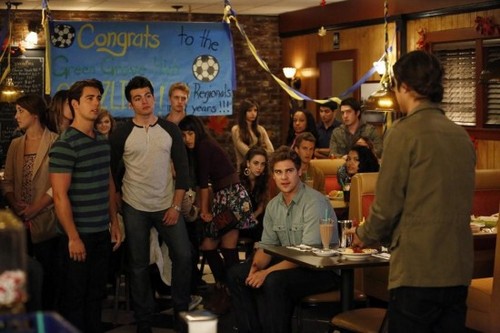 Tonight on ABC Family TWISTED continues with a new episode called, “Out With the In-Crowd.” On tonight’s show a secret with the power to exonerate Danny forces Lacey to choose between justice and popularity in the summer finale episode.  Did you watch the last episode? We did and we recapped it here for you.

On last the last episode when Coach Chandler took the blame for covering up the soccer team poisoning scandal, Regina’s mother Gloria targeted Danny for expulsion, leaving even his friends unsure if they should defend him. Meanwhile, Kyle found a troubling connection between the Desai family and Green Grove City Hall, and was even more dismayed when he learned the mayor, had hired another investigator to look into Regina’s murder. And Rico scrambled to stop the spread of a revealing video that would rip friendships apart and hurt someone he cared about deeply.

On tonight’s summer finale a confrontation between Danny and Archie at a soccer team party reveals treachery lurking among the in-crowd. Lacey must make a choice to keep her popular friends, at Danny’s expense, or speak out for what she thinks is right. Tyler continues to pursue Jo and Jo makes a decision she might regret. Lacey also discovers that Phoebe may hold the key to unlocking new clues about Regina’s mysterious past. Meanwhile, Kyle’s suspicions rise when private investigator Marilyn (guest star Stacy Haiduk) unearths shocking new evidence to refute Karen’s confession. And Tess realizes it’s time to call on the help of an old friend. Joe Lazarov directed the episode written by Debra J. Fisher.

Lacey is persona non grata at school. None of her friends want to talk to her and someone tagged her locker full of slurs. She gets so desperate for some human interaction she approaches Archie. She tells him how sorry she is about hooking up with Danny. She claims she was lost and confused. Sorry that’s not sitting too well with Archie. For instance he remembers when she had snuck off at the cemetery party. Lacey tries to say nothing serious happened with Danny while they were together yet her apology has not won her invite to his team party later.

Jo could have helped Lacey through her loss of status but even Jo is angry at Lacey. She hates how they kept secrets from her. She spills this out and more to Rico and he simply sits there. Never once does he even start to tell her that he knew before she did. He’s too afraid he’ll lose her.

However that’s no longer in his hands. Danny went and fetched Lacey to go with him to Jo’s. He feels if they go to her and apologize maybe she’ll forgive them. No, not this time Danny. They get there and are barely inside before Jo tells them she’s done. She won’t be taking any of lies anymore because that’s all he does. Lies and then says he’s sorry. Then there’s Lacey. Lacey is worse for always having been mad at Danny for lying. She can’t take it, she’s done. And when Lacey accidently revealed Rico tried to help her bury the video; Jo turns on him too.

Kyle had a rough day at work. The agent brought in to “help” with the case is only focused on pinning the murder on Danny. When he gets home and hears what happened with the video he tries to get Jo out of her funk by taking her to family movie night. Once at theaters though Jo ditches him and Tess. She ran into Tyler and his offer sounded better.

With their family night cancelled, Kyle and Tess return home only to find Rico there waiting. He wanted to get his book bag back. Also he wanted to talk to Jo. Hopefully get her to forgive him. Sadly he found out that Danny is out and yet Tyler is in.

Danny is out with a lot of people and in order to fix Lacey’s life. Those two stage a scene where Lacey publicly tears into him. It’s the perfect setting. They’re at the team party and Danny pretends to be a jerk about getting expelled. Lacey’s rant has at least won her place back in Archie’s good graces. Still she’s not that quick to forget that when he joined her into attacking Danny he kind of let his own secret out of the bag. He was behind poisoning their teammate.

She’s back in but she no longer wants to be there. She tells Archie what she thinks of him and then hits back at Sarita. She’s done feeling sorry for herself. Danny caught that little confession too. He calls out his old friend and asks him whether he can truly trust now that he knows he poisoned him?

Out of nowhere Danny gets a text from Jo asking to meet. When he shows he thinks she’s ready to forgive when in actuality she wants to know if the door is close on them. She needs to know two things. If he still has feeling for Lacey and does he see her anything more than a friend. He tells her he’s sorry. He tries to say the three of them can work it out but Jo isn’t willing to try. She leaves him and returns to Tyler. She’s going to forget anyway she can.

Kyle gets called in to the station. The agent insistence on dredging up the lake has come up with something. The murder weapon. It reportedly has Regina’s blood and Danny’s fingerprints on it. Kyle want to further investigate the weapon but he’s sidelined.

Karen found out the police are looking for her son. Luckily she only recently blackmailed her boss into getting her extra cash. She wants to take her son and run. Danny tries to argue although she has a point. There’s nothing keeping them in town.

Jo come back home, after throwing away her virginity, and she runs into Rico who was still waiting. It looks like Rico is finally being courageous. He tells her he’s in love with her and he gets…nothing. She stands there right after he kisses and does nothing.

The police arrive at the Desai home and they find Karen but not Danny. He’s made a run for it. Meanwhile Tess, Jo’s mom, calls a number she had hidden in her home. She tells Vickram, Danny’s dead father, it’s time to come back home.

She might be the woman Regina fought with one time and who gave Regina a vicious scratch. Phoebe had witnessed it but never knew who the woman was.