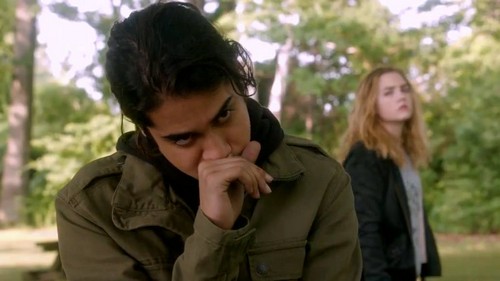 Tonight on ABC Family TWISTED continues with a new episode called, “Poison of Interest.” On tonight’s show when the poisoning scandal comes to light in Green Grove, certain parties are dead set on getting Danny expelled for good. Did you watch last week’s show? We did and we recapped it here for you.

On last week’s show  the Desai family’s connection to Regina threatened to complicate things between the friends, and Jo stumbled upon a shocking secret about Lacey’s family.  When a major development in the murder investigation threatened to send Danny away from Green Grove for good, Danny and Kyle found a reason to work together and Jo and Lacey contemplated whether to reveal a major piece of evidence. Lacey’s aloof and disapproving father, Samuel (Allan Louis), arrived in town for Lacey’s sister’s birthday party hiding a major secret. Meanwhile, Danny was keeping his own secret from his best friends and realized it may be time to come clean. And Rico was alerted to a shocking video that had the potential to destroy friendships and reputations.

On tonight’s show When Coach Chandler takes the blame for covering up the soccer team poisoning scandal, Regina’s mother Gloria (Jessica Tuck) targets Danny for expulsion, leaving even his friends unsure if they should defend him. Meanwhile, Kyle finds a troubling connection between the Desai family and Green Grove City Hall, and is even more dismayed when he learns the mayor (Christopher Cousins), has hired another investigator (Stacy Haiduk) to look into Regina’s murder. And Rico scrambles to stop the spread of a revealing video that could rip friendships apart and hurt someone he cares about deeply. “Twisted” Executive Producer Gavin Polone directed the episode written by Executive Producer David Babcock.

Tonight’s episode looks like it is going to be great and you won’t want to miss it, so be sure to tune in for our recap of ABC’s  Family ‘s “The Truth Will Out.” While you wait for our recap hit the comments and let us know what you think of season 1 of Twisted, so far?  Also, check out a sneak peek of tonight’s episode below while you wait for us to get to the recap!

Danny is without friends. Literally he’s without friends. Everybody has slowly turned against him. Jo and Lacey weren’t willing to stick around to hear anymore lies. His whole necklace story was just a little bit too fanciful. Now the mothball incident has come out. The one where he was accused of poisoning his fellow teammate in order to retake a prime position on the field. Yeah that’s been leaked.

Jo hears about it and instead of her usual gung-ho attitude about helping to find the truth she’s choosing to automatically believe Danny is guilty. She’s being extremely harsh and even her own parents agree that she should at least give Danny the benefit of the doubt. Tess she expected but Kyle defending Danny doesn’t shake her up too bad. She’s not there wondering what he must have found out about Regina’s case to make him think Danny couldn’t have done it. Jo simply wrote off Danny. The lying hurt but odds are she never liked being compared as a sister.

It would hurt even more if she ever saw the sex tape. Rico for all his efforts has tracked down who sent him the video. It was a friend and fellow athlete. He wasn’t out to hurt anyone. He was simply being a pervert willing to share his amateur collection. Rico begs to destroy the tape saying it would too many live. Luckily his friend is willing to destroy it.

To put it briefly, the Mothball Incident has given Danny’s enemies means to get rid of him. They’ve fired his coach for supposedly covering it up and now the school board, pushed by Regina’s mom, wants to expel him. His former ally and principal can’t be much help anymore. After all he has to protect himself now. Cole, his once friend, is even in on it. He’s proclaiming to the School Board that Danny poisoned him. Danny suspects Archie probably got to him.

It’s amazing how quickly people would drop Danny in order to keep some social status. Lacey is making plans to move on as if she never secretly dated Danny. The only thing she continues to do despite disapproval is to talk to Jo. Archie comes upon them wanting to talk to Lacey but the jerk tries to dimiss Jo. Lacey wasn’t having it so Archie back down. However he then talks to them about Danny and not in the usual way. He’s saying that he feels sorry for Danny with the ways things turned out.

Lacey thinks he’s being a nice guy and Jo is suspicious. It’s too weird how Archie suddenly does a 180 now that what he always wanted has come true. Next thing you know, Lacey is ready to be Archie’s friend. The friendship may not work out though. Rico interrupts that heartfelt moment to tell her about the sex tape. He wanted to warn her in case the tape still leaked.

Tyler proves to be more than a pretty and ambitious jerk. He didn’t go through with his movie. Not after what happened at the school. Jo, weary of Archie, enlists his help. They can use his footage of when people said nice things about Danny in order to keep him from getting expelled.

Kyle isn’t getting anywhere with Regina’s case. The mayor wants Danny to be the killer and Regina’s mom, Gloria, refuses to have anything bad about her daughter be said. Tess tries to help him by talking Gloria herself but the woman is too bent on revenge to by reasonable. She wants Danny in prison and she’s going to do everything she can to make it happen.

They found a video of Cole saying Danny was a friend of his. He did the interview after he got sick. Jo and Danny go to him to try and change his mind about Danny’s expulsion hearing. He did point a finger at Danny in order to remain popular. He can’t lose everyone else over Danny. Jo wants to threaten him but Danny lets him go. He understands wanting to fit in.

It’s the day of Danny’s expulsion hearing. Archie gave a heartfelt performance of kid scared of Danny. The moment he gets to sit back down he gives Danny a subtle smirk.

Guess what Danny told him earlier made an impact. Cole doesn’t shoots down Danny in court. He simply states he doesn’t know how he got sick but Danny was a good guy and he still believes he is.

Tess tries to be a good character witness as well and it weren’t for Gloria, it could have been pulled off. Gloria tried to attack Tess’s testimony and she insulted Danny. Insult Danny, you’ll get his mother. Karen jumps ready for a fight. Gloria called her son a serial killer so Karen called her daughter a whore. These are the adults.

The hearing is brought back to order and Jo gets to give her testimony. She didn’t mean to but without saying it fully everyone knows she’s in love with him. Lacey wasn’t in the hearing but she knows now. Rico told her in order to get her help in getting rid of the sex tape. They both didn’t want to hurt Jo.

Kyle’s authority has been questioned so much that the mayor has brought in an outside investigator. She’s no there to truly investigate and Kyle knows it. She’s there to pin Regina’s death on Danny.

Danny gets expelled. He’s was about to clear out his locker when the sex tape went viral. Everyone got it. Archie, Sarita, and Jo.