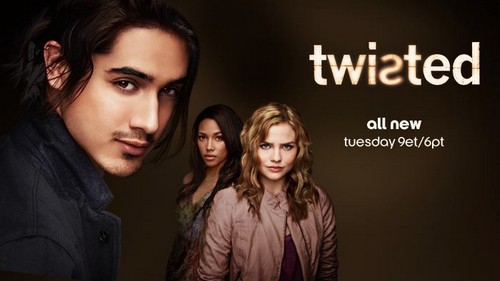 Tonight on ABC Family TWISTED continues with a new episode called, “The Truth Will Out.” On tonight’s show Danny is keeping his own secret from his best friends and realizes it may be time to come clean. And Rico is alerted to a shocking video that has the potential to destroy friendships and reputations. Did you watch last week’s show? We did and we recapped it here for you.

On last week’s show a disturbing prank rattled the Desai house.  When new evidence in Regina’s murder mystery pointed to Connecticut, Danny, Jo and Lacey decided to hit the road, without telling their parents. The trip could well end in disaster: Jo and Lacey were at odds, with Danny struggling to play peacemaker, and Danny was blatantly violating his parole by crossing state lines. Meanwhile, Kyle was determined to track Jo down, and Karen and Tess bonded over an impromptu pottery lesson.

On tonight’s show the Desai family’s connection to Regina threatens to complicate things between the friends, and Jo stumbles upon a shocking secret about Lacey’s family.  When a major development in the murder investigation threatens to send Danny away from Green Grove for good, Danny and Kyle find a reason to work together and Jo and Lacey contemplate whether to reveal a major piece of evidence. Lacey’s aloof and disapproving father, Samuel (Allan Louis), arrives in town for Lacey’s sister’s birthday party hiding a major secret. Meanwhile, Danny is keeping his own secret from his best friends and realizes it may be time to come clean. And Rico is alerted to a shocking video that has the potential to destroy friendships and reputations.

Tonight’s episode looks like it is going to be great and you won’t want to miss it, so be sure to tune in for our recap of ABC’s  Family ‘s “The Truth Will Out.” While you wait for our recap hit the comments and let us know what you think of season 1 of Twisted, so far?  Also, check out a sneak peek of tonight’s episode below while you wait for us to get to the recap!

Karen is still claiming to have killed Regina. Danny wonders if his mother is only doing this because she secretly believes he did it but she denies it and says she just wants him to be happy. Danny doesn’t say that last part to Jo or Lacey. Although the three agree to start telling the truth. That means they show the blackmail letters.
Kyle is hesitant to believe Karen actually killed anyone but the letters do offer up proof. He honestly wants to solve the case instead simply pinning on Danny however Karen is remaining stubborn. Until they have concrete proof that Danny didn’t do it, she’s going to take back her confession. She can’t. She always felt that Danny never knew how much she loved it. This way he knows.

Lacey is having her own emergency. Her dad is back for her sister’s birthday. He’s there for barely an hour and her parents automatically go at it. There reason moved across the country. It was to escape his ex-wife. Luckily Jo offers up her service to surviving her dad’s trip.

Danny is helping Kyle with exonerating his mother. What he should never forget, despite staying with Kyle’s family, is that even if they exonerate his mom the town will still need the real culprit or else they’ll continue to blame him. In the middle of their search the two end up finding some risqué photos of Danny’s principal.

At the party, Jo happens to walk in on Lacey’s dad kissing someone. A man. Guess he wanted to escape more than his ex when he moved. Jo tries to tell him to tell his family. But he wants to keep his two lives separate even after Jo tells him Lacey has felt guilty about the divorce. Later she sees Lacey and she just can’t keep it in anymore. She blurts out the truth.

Danny goes to his principal. He wants to blackmail the guy into providing an alibi for Karen when he learns something. Like how his mom was sleeping with the principal to keep him in school and certain information, like he being suspected in a poisoning, a secret. While he’s still at the school he runs into Rico. Jo was pretty upset when Rico told her about him being the witness still Danny is taking it very calmly. Rico actually helps Danny. Rico told him he didn’t think his own mom would do what Karen did for Danny.

There’s a money trail to Regina and the police need time to investigate. Karen retracts her confession only after Danny convinces her that he can’t lose his mom. Now there’s only one left for him to do. That is to admit the truth about the necklace to Lacey and Jo.

Lacey and Jo are in a better place. Lacey was shocked but she’s happy that she knows now and maybe her dad will start visiting more. The two girls both get a text from Danny saying to meet him. They get there to find a contrite Danny. He tells them about the necklace and this time they’re not blindly following him. This was one secret too many.

All secrets coming out now. Including the secret relationship between Danny and Lacey. Someone sent a video of the two to Rico. Who sent it and better yet what will Rico do with it?