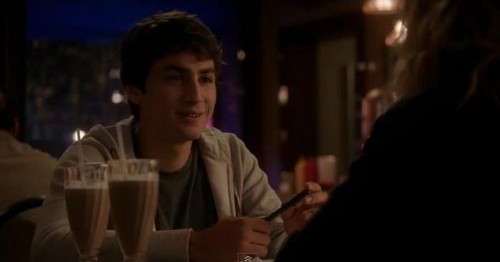 Tonight on ABC Family TWISTED continues with a new episode called, “Docu-Trauma.” On tonight’s show Kyle is determined to track Jo down, and Karen and Tess bond over an impromptu pottery lesson. Did you watch last week’s show? We did and we recapped it here for you.

On last week’s show when Phoebe’s brother Tyler (played by Chris Zylka) held a party at the cemetery, Jo and Lacey pressed Danny to reveal the secrets he had been keeping and ended up spilling one of their own. Danny suffered the consequences of a mishap on the soccer team and Lacey defended Danny against Archie’s increasingly vicious verbal attacks. Meanwhile, Rico confronted Jo about her obsession with Danny’s case. Karen failed at a job interview, and Kyle seized an opportunity to win her trust. Chris Grismer directed the episode written by Brian Studler.

On tonight’s show a disturbing prank rattles the Desai house.  When new evidence in Regina’s murder mystery points to Connecticut, Danny, Jo and Lacey decide to hit the road, without telling their parents. The trip could well end in disaster: Jo and Lacey are at odds, with Danny struggling to play peacemaker, and Danny is blatantly violating his parole by crossing state lines. Meanwhile, Kyle is determined to track Jo down, and Karen and Tess bond over an impromptu pottery lesson. Joe Lazarov directed the episode written by Executive Producer David Babcock.

Tonight’s episode looks like it is going to be great and you won’t want to miss it, so be sure to tune in for our live coverage of ABC’s  Family ‘s “Docu-Trauma” at 9:00 PM EST! While you wait for our recap hit the comments and let us know what you think of season 1 of Twisted, so far?  Also, check out a sneak peek of tonight’s episode below!

Someone has played a prank on Danny’s house. They covered the whole front yard in red jump rope. That won’t help settle Karen’s mood. Danny was attempting to ask her about his dad and Regina. Whatever good will she started off with surely ended.

Too bad for Kyle. He just got Karen the job in order to butter up and now compliments will pretty much do nothing for her. At least he still has the necklace but he better get a move on with his number two now questioning his grand plan.

Danny only ever interrogated his mom because of Lacey’s pushing. She still doesn’t what anyone to now about their relationship yet that fact won’t stop from being a pushy girlfriend. Another thing she feels strongly about is the whole telling Jo. She says she doesn’t want Jo to feel like a third wheel.

Right around this time Jo informs Rico, the hopelessly in love with her fool, that she wants to tell Danny how she feels. Luckily she never got the chance when Danny told Tyler, another guy interested in her, that Jo was like his sister. Tess tries to tell her daughter there’s other fish in the sea but maybe she should start fishing as well. Kyle told her that her that he was working late when he’s actually schmoozing Karen.

Just when it starting to get inappropriate Kyle lets go of the charm and tries to manipulate Karen into turning on her son. It’s always good when people remember their goals. Karen catches on real quick and lets him know it’s better to go through the proper legal channels next time.

Danny isn’t doing so well. A group of guy wearing Danny costumes came upon Danny and Lacey’s romantic picnic. Danny is able to drive them off but the whole situation scares Lacey. The girl goes from calling them “Romeo and Juliet” to saying they need to cool off for a while. As if Danny would take that without question.

Is it a coincidence that Danny talks Jo into accepting Tyler’s date before he goes to Tyler for a favor. Who knows but it sure didn’t hurt when Tyler offered to help throw a party at Danny’s house. Where everyone will be invited.

Danny had asked Lacey to bring stuff over only to be told she isn’t coming. She can’t be seen publicly accepting him. So much for that plan. The only good thing to come from it that Jo at any rate is having fun on her date.

Karen and her lawyer get into an argument. They recently found out about both a witness and the necklace. He wants her to protect herself and she’s unwilling to do so at the risk of Danny.

As his mom struggles, Danny is hosting a party. The second part of their deal was Tyler interviewing him. The interview goes well except for when Tyler confused Danny over which particular prank he was talking about. After all there were two but only few knew about the second.

Maybe he should be worried. Lacey is still at her house when Phoebe mentions how her brother Tyler said the party will be epic. There’s a big surprise that’s supposed to happen. Either too curious or too nervous, Lacey shows up to the party.

The gang (Lacey, Danny, and Jo) get together and try to guess what’s about to happen but no one could have guessed. The guys in the mask come back and they reenact Danny killing his aunt on the dance floor. As luck would have it, Karen had arrived not too long ago and she put an end to the party.

The blossoming romance between Tyler and Jo is over. He pulled the stunt in order for his movie to look better. If Rico was sober he would have been happier about it all.

Karen on the other hand is perfectly somber when she admitted to Kyle she killed Regina. Sometimes a mother will do whatever she can to protect her child.