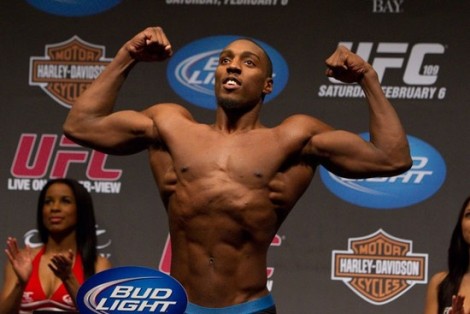 Is this a chicken or the egg discussion? What came first – the uncontrollable anger or the MMA fighting? Phil Davis’ baby mama will try to prove in court that the UFC star’s violence towards her has only grown with his training and is asking for a permanent restraining order and full custody.

According to TMZ, Vantris Patterson claims that Davis (a.k.a. Mr. Wonderful) likes to get physical with her and choke her during sex. She’s tried to make him stop but he’s just responded, “Shut the fuck up, bitch.” Oh, ya he’s also threatened to kill her a couple times if she ever slept with anyone else. She blames his involvement with the UFC: “I am afraid that the numerous fights have negatively impacted his mental stability.”

Davis isn’t taking this lying down though. He’s got some accusations of his own. He claims Patterson is the crazy one and has talked about killing him. She’s also texted him: “I can’t wait until the day you die so I can spit in ur face [painful and slow].” What’s painful and slow about spitting in someone’s face?

Clearly these people shouldn’t be anywhere near each other. Bad things tend to happen. It’s hard to figure who’s to blame though since they both seem a little on the nutty side. I have no idea if MMA fighting impacts a person’s mental stability. I could see how it might but it’s just got to depend on the person. Many people can take part in aggressive behavior for a job and still be functioning, sane human beings. It will be interesting to see how the judge handles this mess.

Is Phil Davis too violent? Should Patterson be awarded the restraining order? Phil Davis shouldn’t be anywhere near that woman but I think that has less to do with what he might do. It’s probably  just best for everyone overall!