BY Dorothy Gale on July 1, 2013 | Comments: 2 comments
Related : Recap, Television, Under The Dome 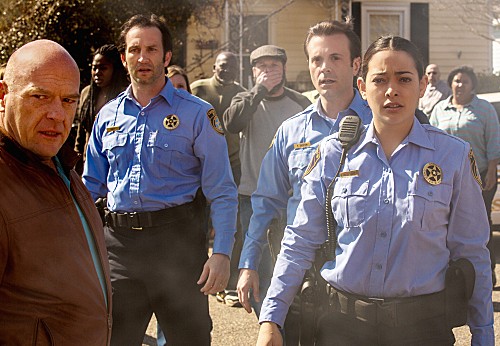 Tonight on CBS their new drama UNDER THE DOME continues with its second episode called, “The Fire.”  On this week’s episode while the residents of Chester’s Mill face the uncertainty of life in the dome, panic is heightened when a house goes up in flames and their fire department is outside of the dome.  Did you watch last week’s premiere episode?  We did and we recapped it here for you.

On last week’s show we were introduced to a small New England town which was sealed off from the world by an enormous transparent dome that inexplicably appeared. In the opener, the dome materialized and the residents of Chester’s Mill struggled to survive as resources rapidly dwindled and panic set in.  We met so many characters to keep track of that I got confused at some point but it’s already proving to be something amazing.

We saw Big Jim’s son Junior as this pathetic kid, but near the end he was insane; he kidnapped the Angie, the girl he loves and locked her into a fallout bunker, now that’s love. We also saw the falling of the dome and the gore was just cool, the cow getting split in two, the plane exploding and an arm was on the ground, a crow flying into it which made it drop dead and best of all Sheriff Duke having his pacemaker torn out of his chest.

On tonight’s show it looks like Junior gets found out by Barbie, that he hid Angie in the fallout bunker.  It appears they have a fist fight and we even see a house explode. Now the fun will finally start with this episode, people are going to take sides and will eventually fight one another because of different beliefs on how to run everything in the dome. The fighting between people is going to get worse and Big Jim explained last episode how there isn’t much of a police force in this town.

This is definitely one series that you will not want to miss this summer. Don’t forget to stay tuned to Celeb Dirty Laundry where we will be live blogging every episode all summer long.  Under the Dome Episode 2 “The Fire” airs tonight at 10PM on CBS.