BY Kristine Francis on July 8, 2013 | Comments: 2 comments
Related : Recap, Television, Under The Dome 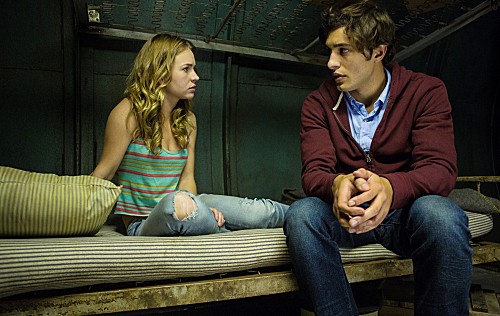 Tonight on CBS their new drama UNDER THE DOME continues with its third episode called, “Manhunt.” On this week’s episode Junior is determined to escape the dome by going underground. Did you watch last week’s premiere episode? We did and we recapped it here for you.

On last week’s show Junior got found out by Barbie, that he hid Angie in the fallout bunker.  They had a fist fight and a house explode. People already started to take sides and started to fight one another because of different beliefs on how to run everything in the dome. While the residents of Chester’s Mill faced the uncertainty of life in the dome, panic was heightened when a house went up in flames and their fire department was outside of the dome.  We found out Reverend Lester Coggins and Big Jim are both guilty of some kind of conspiracy.

On tonight’s show when a former deputy goes rogue, Big Jim recruits Barbie to join the manhunt to keep the town safe. Meanwhile, Junior is determined to escape the dome by going underground.

This is definitely one series that you will not want to miss this summer. Don’t forget to stay tuned to Celeb Dirty Laundry where we will be live blogging every episode all summer long.  Under the Dome Episode 3 “Manhunt” airs tonight at 10PM on CBS.

Linda has to deal with her former co-worker and now prisoner. Sadly the town wants to deliver they’re own form of justice. Julia is questioning whether Linda can handle this by herself. It’s only through Big Jim’s intervention that townspeople don’t lynch Paul. Instead of being smart and remaining in jail though, Paul tricks Linda and escapes from his cell.

The teenagers in the dome have begun to let go some of what their parents taught them. They’re childish and macabre enough to watch videos of Paul killing his partner and then want to be adults by inviting themselves over to strangers’ houses. But Nori doesn’t want to just listen to music, she also wants to crash at Joe’s house.

Big Jim returns to his house. He sees his son and begins questioning him over where he’s been. He’s not concerned; he just doesn’t want his son to make him look bad. The only concern he does show is when he notices Junior’s bruise. He suggests Junior toughens up.

After the little chat with his dad, Junior goes to visit his prisoner in the bunker. He’s still trying to make her believe that the dome is messing with her heads when she begins to manipulate him. She mentions the cement tunnels underground they used to play in. If he can get through them then he bring her out of the dome and her personal cell.

Big Jim isn’t done being a bully. Whatever secret he has with the good reverend, he’s making sure never gets out.

Julia wonders why Barbie ended up in their little town on the day a supernatural event happened. He claims coincidence before changing the topic and asked her why did she of all people stay in this town. She stayed for her husband.

Big Jim frees Linda from the cell. He wants to caution her but Linda tells him he can’t control her. He now knows he can’t control her so he enlists his very own militia. He’s gathering the hicks when he meets Barbie. Barbie doesn’t know he hit Jim’s son but Jim does.

Norrie didn’t tell her moms about staying over at someone else’s house. Carolyn is worried about her daughter when she begins to get heckled by some bigoted patrons of the dinner. Although she didn’t want it to come out, the diner hears how her daughter was going to a rehabilitation center.

Julia sees Junior on his way to the tunnels. She knows he’s up to something but he isn’t telling so she’ll be investigating. She follows him down into the tunnels. They’re blocked too and before his flashlight can explode, Julia warns him. He’s safe but he’s Junior. He doesn’t like that Julia followed him. She tells him she just wanted to find a way out as well.

Junior begins freaking out. He lost the flashlight and doesn’t know how to get out of the tunnels. Luckily Julia did an article on trapped miners and shows him the way. They talk as they travel. She admits that she was disgraced from her job in Chicago. They may be the real reason why she moved with her husband. Junior reveals something as well. He tells her how Barbie hit him but doesn’t mention the circumstances. He starts to questioning her on whether she knew why he was really there.

Big Jim’s Army including Barbie on a manhunt for Paul and so is Linda. The militia find Paul and he ends up getting the better of them. Now it’s only Jim and Barbie hunting him.

Norrie is enjoying her stay at Joe’s yet she’s covering up her mom being lesbians. She claims she was visiting her dad but is now unsupervised. Ben comes in and stops even more lies. He brought some friends that want to use Joe’s backup generator. He also may have mentioned dinner to several people.

Ben’s few friends turns out to be a party. He is after all unsupervised. Although the party gets out of hand when one guy tries monopolize the electricity. Norrie is the one to confront him. Joe is coming to her aide when all the electrical wires caused a fire. Nothing clears a party out quicker.

Big Jim has decided to take a time-out from hunting a Paul. He does this so he can tell Barbie a story. Like how he had to mak an example out of a kid from his past. He just finishes the story when he realizes Paul has his gun on him. Linda is the that shoots Paul but according to Big Jim’s smile; he’s still pleased.

He apologizes to Linda for stepping on her turf and then he promotes her to sheriff.

Julia drops off Junior at home just when Big Jim and Barbie are outside. Junior goes inside quickly and Barbie leaves with Julia. Junior wants to know why his dad was with Barbie but Big Jim tells him to let the grown-ups do their jobs.

Carolyn tracks Norrie to Joe’s house. Norrie finally confesses the truth and is saying goodbye when she touches Joe’s hand and both of them experience a seizure. They’re repeating the same words when Carolyn begs Ben to go and get help.

Junior and go and sees Angie. He brings a first-aid kit for his hands. He had beaten the dome when he found out it went underground. Angie is helping bandage them but she also hid a pair scissors.

Julia starts questioning why Barbie was in town. He’s sticking to his story about simply passing through and goes to take his shower. While he’s in there, she goes through his things and finds a map that has a placed marked.