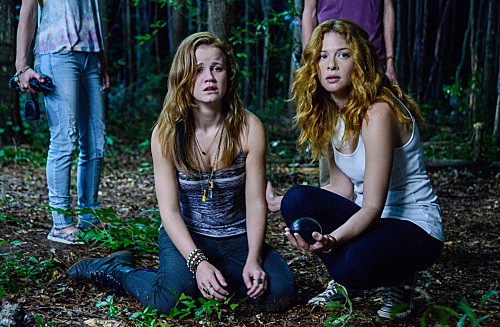 Tonight on CBS their new drama UNDER THE DOME continues with its first season FINALE called, “Curtains.” On this week’s episode Junior, Angie, Joe and Norrie discover who the Monarch is.  Did you watch last week’s episode? If you want to get caught up and missed it, we watched and we recapped it here for you.

On last week’s episode while the manhunt for Barbie continued, Big Jim got the residents of Chester’s Mill riled up and the town demanded justice for all of Barbie’s supposed crimes. Meanwhile, Joe and Norrie had to find a new hiding place for the mini dome.

On tonight’s show Secrets of the Dome are revealed and Big Jim is determined to put an end to Barbie once and for all. Meanwhile, Junior, Angie, Joe and Norrie discover who the Monarch is after receiving a shocking visit from a familiar face, on the first season finale cliffhanger.

This is definitely one series that you will not want to miss this summer. Don’t forget to stay tuned to Celeb Dirty Laundry where we will be live blogging every episode all summer long. Under the Dome Season 1 Finale  “Curtains” airs tonight at 10PM on CBS.

RECAP: The butterfly is hatching, Linda is there and she is upset that the kids knew about the egg and didn’t tell anyone.

At the station, Big Jim slaps Barbie and asks him if he thinks this is a game. Barbie tells him that Julia is out there and she knows the truth, it is only a matter of time.

Junior is touching the dome and asks it, “why do you want  me to kill my father?”. Julia is awake and wants to leave, she tells Angie that she is the only one that can save Barbie.

Linda is with the kids and the butterfly look like it is going crazy in the small dome; every time it hits the sides, it makes black spots and that seems to be copied outside on the big dome as well.

Big Jim tells Barbie that he could end this right now with a bullet to  his head. Big Jim heads outside as everyone is looking outside at the spots that are covering the dome and making it dark inside.

Joe tells Linda that the dome is trying to talk to them, Linda says that she has had enough and calls it in to the station. Big Jim is happy they found it and heads over there, also Junior is on his way. The dome starts to make a loud noise, Norrie and Joe want to touch it so it stops like the last time, Linda says no because it is police property she will touch and when she does, it throws her a couple of feet and she passes out. Junior walks in and Joe tells him they need Angie. Now Ben walks in and says that Big Jim is almost there, Junior helps them to get rid of the egg before his dad gets there. Julia is at prison and both she and Angie rescue Barbie.

Big Jim arrives and Linda wakes up, the dome and the kids are gone. Phil walks into the station and sees that Barbie is loose, he tries to attack him but one of the women hit him on the end with a fire extinguisher. Big Jim and Linda hear Joe on the police radio – he tells Angie to meet them somewhere, but it is a secret place that only they know about.

Angie, Julia and Barbie meet up with Junior, Joe, Norrie and Ben when the egg starts making weird sounds. Norrie, Angie, Junior and Joe put their hands on the small dome and it turns white, then breaks apart to leave just the black egg; the monarch butterfly is dead….no it’s alive and starts flying around. The butterfly looks like it wants to land on Barbie, he is the monarch and Joe says he knew it.

Big Jim knows that Barbie escaped and is driving around. He stops his car near a church and finds the townsfolk going in, they think the blackness was caused by the Lord. Big Jim heads to the front of the church and tells the that the good Lord has not forgotten about Chester’s Mill. Big Jim gives them his word that everything is going to be ok, but everyone has a hard time believing it. Big Jim says that he has faith in them and in God who wouldn’t ask more of them than they could handle.

The egg is doing something, it turns bright white and looks like it is going to explode. Everyone starts running to get away from it, but Julia doesn’t want to leave, she picks up the egg and all the vibrations stop and so does the bright white color. The butterfly flies on to the egg; Julia is the monarch, not Barbie.

Linda and Big Jim are looking around to find the kids and the egg, Linda arrive in the barn and sees the message written there about the pink stars falling from the sky and Jim is shocked; he’s heard this before.

Barbie tells Junior that his dad executed Maxine, he doesn’t believe it; Angie tries to tell him that his father is a monster. Junior pulls a gun on Julia and tells her to hand over the egg. Julie tosses the egg to Angie and tells her to run, the kids run and so does Julia, Barbie stays back to stop Junior.

Big Jim takes Linda to his house, shows him a painting his wife did before she died, it was of the egg and she kept saying pink stars falling from the sky. Big Jim says the whole time he thought his wife was sick, but maybe she was just trying to warn them. Junior calls Linda on the radio and tells her that he has Barbie, he will be bringing him in.

Norrie holds the egg and asks it what they should do; they see Norrie’s mom, it really is not her, it is “them” they try to take on a familiar appearance to communicate with them. The person says the dome was sent to protect them, they will see in time. If they want the darkness gone, they must earn it, by protecting the egg. If they fail, it is the end for all of them. Julia asks how do they protect it and who are they protecting it from, the person is gone.

Barbie is back in jail, Big Jim wants to know where the egg is. Barbie tells Big Jim that he may think that he is some kind of a God to these people but they both know he is something worse, a politician.

Big Jim sends a message over the radio, tells Julia that she has something powerful in her possession and he wants it, if he gets it Barbie will have a reduced sentence. Junior walks into the station and tells his father that people want him dead because he has done bad things. Big Jim tells Junior that he went into his mom’s studio and saw the paintings; he feels the dome is their destiny. Big Jim tells Junior that he did take lives, but none that were not absolutely needed to protect the town and he didn’t tell him because he was protecting him. Big Jim thinks that they are “the chosen”, his mom painted the pink stars and they are shining down on them. Big Jim says that from hear on out, no more secrets between them and puts his hand out to shake Junior’s hand, but he comes in for a hug instead.

Julia tells the kids that she wants them to go somewhere safe, if she is truly the monarch then she will take care of the egg. In the middle of town we see hanging posts set up.  Big Jim heads outside and speaks to the townspeople, he tells them that today they are sending Barbie to death. Meanwhile, Julia is out on a boat in the middle of the water with the egg. Junior puts the noose around Barbie’s neck. Julia drops the egg into the water and it turns bright pink, then flashes of light come up from the water and all the townspeople see it. Big Jim says that clearly the good Lord is looking upon them with favor and they need to thank him for their blessing. The light turns very bright all around them. Big Jim tells Junior to do it NOW.

That is it, we have to wait to season 2 to see if Junior pulled the switch and sent Barbie to his death.