BY William Blesch on September 9, 2013 | Comments: 2 comments
Related : Recap, Television, Under The Dome 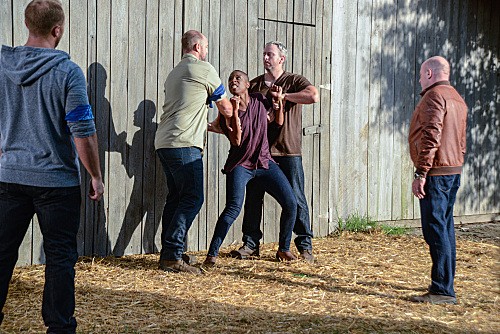 Tonight on CBS their new drama UNDER THE DOME continues with its 11th episode called, “Exigent Circumstances.” On this week’s episode Joe and Norrie must find a new hiding place for the mini dome.  Did you watch last week’s episode? If you want to get caught up and missed it, we watched and we recapped it here for you.

On last week’s episode Big Jim turned the town against Barbie when the truth about his past was revealed. Meanwhile, Maxine made it personal when she confronted Barbie’s closest ally.  A manhunt for Barbie began and 1 of his closest allies fought for their life.

On tonight’s show While the manhunt for Barbie continues, Big Jim gets the residents of Chester’s Mill riled up and the town demands justice for all of Barbie’s supposed crimes. Meanwhile, Joe and Norrie must find a new hiding place for the mini dome.

This is definitely one series that you will not want to miss this summer. Don’t forget to stay tuned to Celeb Dirty Laundry where we will be live blogging every episode all summer long. Under the Dome Episode 12 “Exigent Circumstances” airs tonight at 10PM on CBS.

RECAP: Big Jim is having a town meeting and telling the town folks that they are not going to stop until they find Barbie. Big Jim declares a state of emergency to bring Barbie to justice, they are going to have a town wide sweep of all homes. Big Jim calls on everyone to help with the town’s resources and says that the dome will not break them.

Dodee overhears something on the radio about the military looking for Barbie and the egg, she freaks out.

Joe thinks Barbie is the monarch but Norrie doesn’t thinks so. Carolyn walks into the barn and asks what is that to the egg, Norrie says it is the dome’s heart. Carolyn tells them to hide the egg because there is going to be a town wide search, she doesn’t trust Big  Jim. Angie says that they should bring the egg to Ben.

Linda is talking to some recruits and tells them not to shoot Barbie. Junior comes in and tells his father that he is in danger, someone is going to kill him. Big Jim tells him to get a hold of himself and that Barbie tried to kill Julia yesterday, he wants Junior to protect her. Junior says to him, just be careful. Junior heads to the hospital and promises his dad that he will call him if Julia wakes up.

Dodee goes to see Big Jim and tells him that the military is searching for Barbie.

Angie heads out of the barn and sees Barbie who wants her help.

Junior is at the hospital and keeping an eye on Julia. Meanwhile, Barbie is going to hotwire an ambulance and try to kidnap Julia from the hospital with Angie’s help. Barbie tells Angie that Big Jim has taken out every person that has been in his way and Julia is the last one.

Dodee is at the radio station and tells Big Jim about the egg, but tells him to hold because she promised Phil that she would keep the music going. Big Jim overhears the military talking.

Joe goes to get Ben and brings him to Norrie and the egg; they ask him to stash the egg in his stash house.

Barbie is in the hospital with Angie, they see Junior and duck out of sight.

Dodee overhears things about Big Jim from the military and she is terrified; she knows he killed the reverend. Dodee asks Big Jim how many accidents have there been. Dodee says she doesn’t believe Barbie did anything. Big Jim says that all he did was protect this town. Dodee tells Big Jim that she saw the egg in Joan’s barn. Dodee tells Big Jim that she can help, maybe they can get the dome taken down. Big Jim pulls a gun on Dodee and calls him a sick bastard. She tells him that people are going to smile when he dies. Big Jim shoots Dodee dead, then shoots some of the equipment and lights the place on fire.

Big Jim calls Linda and tells her that the radio station is on fire and she needs to get down there. Phil is with Linda and is convinced that it is Barbie who set the place on fire.

Angie is at the hospital dressed in her candy striper outfit and speaks to Junior. Angie asks Junior if he trusts his dad, he says yes. Angie tries to remind him that he always didn’t trust him. Angie tells Junior that she needs to speak to him, in private.

Phil and Linda arrive at the radio station, Phil is so upset and Linda tells him that Barbie won’t get away with it.

Junior and Angie are alone, he kisses her and she kisses him back to divert his attention away from Julia. Junior backs off and tells Angie she tasted like cigarettes. Junior starts running and finds Julia is gone.

Big Jim shows up at the farm, he tries to bully himself into the barn and Carolyn freaks out. Norrie walks up with Joe and they try to stop Big Jim, his men grab the two kids and when Big Jim goes into the barn and see nothing he gets upset and arrests Norrie and Joe for obstruction of justice.

Barbie has Julia in the ambulance, Junior tries to stop him and he hits him. Angie is driving the ambulance and Barbie tells her to leave. Linda pulls up and tells Barbie to put his hands on his head. Phil sees Barbie and hits him in the mouth. Linda then calls Big Jim and tells him that she has Barbie.

Joe is in prison and asks Norrie to talk to him, she says Andrew is right and they should have killed Big Jim when they had the chance. Norrie says he’s being a complete Nazi and believes that Big Jim will kill Barbie. Big Jim comes in and tells the three they are being well behaved, he tells Joe he knew him his whole life and thinks he’s a decent and smart kid. Big Jim then says that his sister is beyond help but Joe can fix it all, he asks Joe to show him the egg and that keeping it hidden is a serious offence. Norrie laughs at Big Jim, she asks why they call her Big Jim and calls him a loser trying to scare kids. He opens her cell and walks in, he asks her to repeat it. Norrie says he doesn’t scare her, He tells her to tell him what he want or he will do something to her mother. Norrie attacks him and Big Jim easily throws her away, he locks her cell and leaves. Angie is listening to the radio and Linda is calling everyone to find her in the ambulance. Linda brings in Barbie and completely ignores him, Barbie then tells her that it’s all a lie and would never hurt Julia. Linda asks about her husband and then leaves him. Catherine says she will not leave till Joe and her daughter Norrie are released, Linda tells Big Jim that they will get Angie sooner or later. Linda then tells Big Jim that Barbie is locked up; Ben hears loud ringing coming from underneath the bed sheet and takes a look. He covers the egg with more blankets because it keeps getting brighter, people come to get Norrie and Joe. Barbie asks Big Jim what they are doing with them; Big Jim says he can’t do anything about it. Big Jim tells him to confess everything to the public and if he doesn’t do it then he will charge Angie as an accomplice. Big Jim will also link Norrie and Joe to the death of Dodee; he also says that Julia will go down for having a criminal murder her husband for insurance money.

Barbie tells Big Jim to leave everyone else out of it and he will say everything Big Jim wants; he then asks how he will know if Big Jim will keep his word. Big Jim tells him he won’t.

Norrie comes in and hugs her mother, they say they have to go and check out the dome and see if it’s safe. Big Jim tells Linda to track them because they may know something about leaving the dome, Linda believes him and goes to do as he asks. Big Jim tells Junior to go out and find Angie for him; he then asks him what’s wrong. Junior asks what’s with finding Julia if they have Barbie locked up, he says he loves his dad but tells him to never lie to him because it will be bad for both of them. Big Jim then says Barbie confessed to everything and he will do it publicly. Big Jim asks if Julia was conscious and Junior gives a slight shake of the head.

Ben is outside of his house just looking depressed, he says the sphere is going crazy and Norrie, Joe and their mother rush in. Julia wakes up and is confused, Julia mentions a woman shot her and she’s never seen her before.

Angie tells her they are in a storage room; Julia asks why they are hiding. Angie tells her that Big Jim is lying to people about Barbie shooting her; she asks where’s Barbie. Big Jim brings Barbie in front of a large crowd. He tells them they went through a lot this week and lost some people and even though they are not part of the world anymore the rules are necessary to follow and justice will happen. Norrie and the gang see the egg glowing a weird orange like colour and ringing very loudly; Junior goes to the big dome and touches it with both hands. Angie asks what will happen to Barbie; Julia says he will be killed.

Linda walks in on the egg glowing, it’s ringing loudly and the cocoon inside is shaking.Barbie looks Big Jim in the eyes and says he’s not guilty in front of all the people.