BY William Blesch on September 2, 2013 | Comments: 3 comments
Related : Recap, Television, Under The Dome 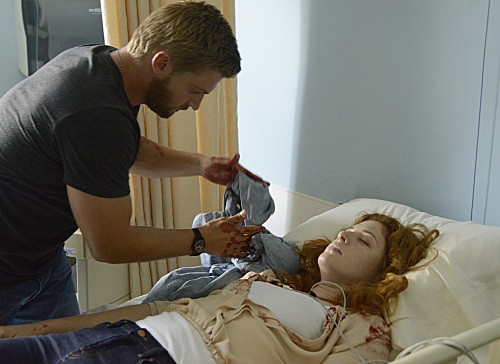 Tonight on CBS their new drama UNDER THE DOME continues with its 11th episode called, “Speak of the Devil.” On this week’s episode Maxine makes it personal when she confronts Barbie’s closest ally. Did you watch last week’s episode? If you want to get caught up and missed it, we watched and we recapped it here for you.

On last week’s Julia uncovered the truth about her husband’s disappearance and unravels some of Chester’s Mill’s darkest secrets. Meanwhile, Maxine showed Barbie how she planned to take control of the town.

On tonight’s show Big Jim turns the town against Barbie when the truth about his past is revealed. Meanwhile, Maxine makes it personal when she confronts Barbie’s closest ally.  A manhunt for Barbie begins and 1 of his closest allies fights for their life.

This is definitely one series that you will not want to miss this summer. Don’t forget to stay tuned to Celeb Dirty Laundry where we will be live blogging every episode all summer long. Under the Dome Episode 10 “Speak of the Devil” airs tonight at 10PM on CBS.

RECAP: Norrie, Joe, Angie and Junior marked the constellations all over the barns and Joe believes four stars are them. The monarch is hatching soon from it’s cocoon; Norrie says it’s too much with them knowing about this cosmic secret.Joe asks if they should tell Julia; Junior agrees with him and he thinks when the egg hatches it will lead them somewhere or to someone. They agree on Joe to go tell Julia.

Linda questions how Big Jim bought propane under the table and how he has a deal with a drug dealer like Maxine; Big Jim tells her that Chester’s Mill is staying alive because of his propane. She says it doesn’t change the fact that if the dome didn’t come down he’d be in jail; he tells her to charge him or she could go after a real criminal. Big Jim aims her towards Barbie as a hint as someone to question.

Barbie is sitting downstairs and Julia comes down to see him; Barbie asks if she wants him to leave. Julia tells him to bring her to Peter’s grave for closure so the two of them can move on.

Linda asks what Barbie has ever done and why she should go after him, Big Jim tells her how he’s partnered with Maxine and he tells her how Barbie was with Peter when the dome came down and now the haven’t heard from him since. Big Jim says people has secrets that you couldn’t imagine, Big Jim says he’s an open book with nothing to hide.

Barbie runs downstairs and finds Julia on the floor bleeding; Barbie contacts Linda and says that somebody has shot her and he needs someone to help him out soon. Big Jim tells her to think before she goes; warning her about him. Junior and Angie are together; Junior says it’s crazy and that their meant to be together even the egg thinks so. Angie tells him they will never be together and says that when the dome goes down she will leave; Junior says he’s done with everything. He tells her he’s done with her, the dome and the pink stars.

Linda’s car runs out of gas and she asks someone for a ride; the guy ignores her and she finds someone else willing to drive over. Barbie sees Joe outside and tells him to come inside and help him get Julia into the car and that he has to drive; Barbie and Joe pull her in and Barbie sits in the back stopping the bleeding as Joe drives to a hospital. Big Jim walks outside and sees a storm brewing; Maxine tells Jim they need to talk. Big Jim looks at Maxine and tells her he knows it was her that shot Julia; she says it’s all on him what happens next. Junior comes in and Maxine mentions how he has the same eyes as his mom, Big Jim tells her it’s enough. Maxine says she is leaving and Junior asks who she was and Big Jim tells Junior it was the devil.

Barbie tells Joe to hurry up but the storm is dropping trees; he tells him that the dome might be angry at them.

Joe stops at some place and Barbie starts taking Julia out of the car; barbie tells Joe to get inside and they’re at the hospital. The nurse who was helping them is called off and Barbie says he needs alcohol and a plastic pen and a plastic bag. Big Jim and Junior go inside of their fall out shelter with the storm brewing. Junior asks why his dad didn’t hand in his guns; Big Jim tells him that Maxine will take everything he’s worked for and how she is trying to ruin it all. Junior says she seems nice and Big Jim tells him he has no idea what he’s talking about, he tells him the she’s angry and wants to hurt him by hurt Junior himself. Junior says to let him help him, Big Jim says no and tells him he did the best he could raising him alone and won’t punish him anymore. Big Jim says someone like Max he doesn’t know how it will all end, he hands Junior a rifle and tells him to stay in the house and let no one inside.

Dodee wonders if the lightning changes anything and she has the communication working and hears some message to Barbie. Junior is in the house and hears knocking outside; he aims the gun at the door and sees Angie outside; she asks him what the hell she’s doing. Angie says the dome is sending a message and that he needs to go back to the group or it will kill everyone. Barbie is trying his best to help Julia and a tree smashes the window; he notices how Julia’s heart stop and he stabs her with a pen and sucks the extra air out of her. Junior tells Angie that they should go to the shelter; Angie tells him that he has to be with them. Angie tells him she needs him and they must go, Junior saves her from a flying bench; the storm then completely stops and Angie was right. Barbie notices from nowhere that Julia’s heart starts beating again; Joe looks outside and notices the storm stopping. Joe tells Barbie that he has to tell them everything; Barbie questions him and Joe tells Barbie he’s the monarch meant to save lives.

Maxine is walking on the beach and notices a corpse in the water, she walks over to it and finds her mother Agatha dead;Maxine notices her hands tied and looks pissed. Barbie is with Julia and gives he a kiss on the forehead; he tells the nurse he has to take care of something and leaves Julia in the hospitals care. Barbie notices Big Jim arrive and tells him Julia is okay; Big Jim tells him Max shot Julia. Barbie says he knows and Big Jim tells him he’s in to take her out; Barbie says he wants her caught alive. He wants Big Jim to not kill Max, he also tells Big Jim that he will knock him off his his throne. Angie and Junior arrive to the barn and fine Norrie sitting at the little dome; Joe walks in and tells them how Barbie saved Julia’s life. Joe then tells them that Barbie might be the monarch because the storm stopped at the same time he saved Julia; Junior then tells them it was him trying to leave. Norrie tells them they need to go to the big dome; Joe says stuff happens when Norrie and him touched it. They are all going to touch the dome. Barbie and Big Jim are making their plan; Barbie is setting an alarm clock just in case. Barbie takes out some supplies and they’re on the move, Linda arrives to Barbie’s house and the guy with her didn’t know he’d go that far. He tells Linda that nobody knows Barbie at all; he tells Linda about how Peter was in deep with the house and Barbie was the collector agent and that he killed Peter. Linda then concludes Julia figured it all out.

Big Jim and Barbie are caught when sneaking up on Maxine; they have guns pointed at their heads.

Maxine tells Barbie how Jim killed her mother; barbie says they are both the same. She tells Barbie they were good together, Barbie says they were nothing and only worked for her; she says she is giving him a chance to live. Barbie tells her she is not right for him, she comes closer with the gun and says she has plans for him; saying she trusted him but screwed her over and is no different from anyone. Jim tells her she’s just like everyone else in this town, Barbie’s alarm goes off and the power goes out, Barbie pulls her gun out of her hand and aims it at her, Linda comes from the hospital and figures out how Jim and Barbie left together. Barbie and Big Jim have a gun pointed at Maxine and her henchman. She says they have no idea; Barbie tells Maxine they are over; Big Jim goes ahead and shoots both Maxine and her henchman. Barbie asks him what the hell he’s doing; Big Jim goes to shoot Barbie and Barbie hits him; Linda comes over and Big Jim plays with it and tells Linda that Barbie is nuts. She tells Barbie to back up and put the weapon down, she makes him put his hand behind his back; Barbie hits Linda and is on the run. She shoots at Barbie but runs out of bullets. Dodee says to Jim that the military knows Barbie is inside the dome; she mentions how the military says that Barbie is the one they are looking for.

Big Jim then announces how Barbie killed Maxine, attempted murder on Julia and himself right on the radio; he has put all the deaths on Barbie’s hands and has him made a criminal on the run. Norrie, Angie, Junior and Joe are at the dome; they all go and touch the dome. On the outside they see Junior’s dad and he starts bleeding form his chest a lot and his stomach as well; there’s blood pouring out of him like crazy and now each of them have knives with blood on it. Junior starts freaking out and runs to go find hi dad, Joe asks what the hell it was and Angie says that they got their answers and Big Jim has to die; they are also the ones to do it.