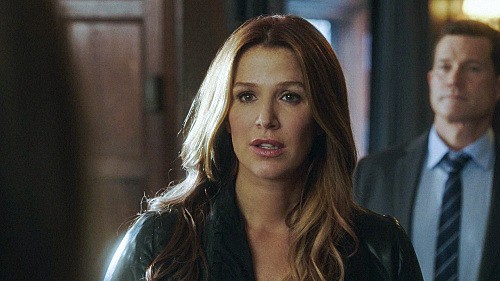 Tonight on CBS UNFORGETTABLE continues with a new episode called, “Line Up or Shut Up.” On tonight’s show all roads lead to dead ends when Carrie and Al investigate the murder of a young man found in a spots car.  Did you watch last week’s episode?  We did and we recapped it here for you.

On last week’s show Carrie and Al’s latest case – the murder of an Afghani cab driver – had the potential to turn into a matter of national security when it’s discovered that the victim was a government informant.

On tonight’s show when a young man is found dead in an expensive sports car he was delivering to a diplomat, each clue leads Carrie and Al to yet another possible motive for the murder.

Tonight’s episode 6 looks like it going to be great and you won’t want to miss it. So be sure to tune in for our live coverage of CBS’s Unforgettable episode 6 — tonight at 9 PM EST! While you wait for our recap check out the sneak peek video below of tonight’s episode!

In an apparent car chase with the police, a hot red sports car has managed to allude them without property damage. The driver a handsome young man smirked his way to freedom but by morning he’s found with a gunshot to the head.

Carrie was already in a bad mood. She confronted one of those stores that’s forever having a going out of business sale. She called the salesman out on his scam and got him to be a little more honest. Seeing as most of his products are two years old and overpriced. She remembers all of his sales back from a couple of year ago and was just telling him all about it when she got the call.

The victim was without his wallet or cellphone but they left the sport car. The same sports car that’s registered to a diplomat. Did the diplomat have enemies?

Lee and Al are in love this car. Although without the supersized cup holder Al isn’t fully sold. The guys find out that car was in a car a chase last night. At first the assumption is that the victim was a trust fund kid. But he’s not. After they check in with the diplomat however they were told his car hadn’t been delivered yet. The victim otherwise known as Ezekiel was supposed to have delivered it. That was his job.

The same job his father didn’t know anything about. The father was very overprotective. He had walked his son to school every day until he sixteen. But he doesn’t seem to show the same concern for his other son Francisco. It’s Francisco that has to show Carrie to Ezekiel’s room. Along the way she memorizes Francisco’s room as well. The younger brother told her his brother owed people some money once they were away from his dad. The bruise on cheek though he claims he got falling off a bike.

The coroner is able to say Ezekiel’s death was meant for him. The shooter shot up close. Close enough to see the driver. That rules out the diplomat but raises the question of who exactly did Ezekiel owe money to? Luckily Carrie remembers a sign from Francisco’s room that has found a way to pop up again in invetstigation. It’s not a gang. It’s a street racing symbol. Both brothers like to race cars.

Tracking down the ring leader, who weirdly enough lives in suburbia with a mom that cooks his breakfast to his particular taste, isn’t as easy as they thought. The mama’s boy raced out to his car and tried to make a run for it. Sadly he didn’t count on Carrie running a 10k race through the neighborhood and automatically having the whole place mapped out. They were able to cut him off thanks to the human GPS.

Stevie is his name and he someone did owe him money but it wasn’t Ezekiel. It was Francisco. That’s why he gave the teenager that bruise. Ezekiel agreed to pay off his little brother’s debts and should have done it last night. This would be right around the time he got murdered. At first the cops think Ezekiel tried to give Stevie the expensive car yet Stevie is smarter than he looks. He wasn’t going to take a hot car so he suggests Ezekiel might have taken the car to have it stripped. They using the money he got from the parts he could have repaid Stevie.
Al without any help manages to find Top Shop. The owner reveals to them she would have sold the parts but the car is a fake. She tested it herself.

Ezekiel now had a fake car. Someone could have been angry after they find out that truth. The police go to talk to the car dealer and they find stuffed into the trunk of one of his cars. This whole scene is starting to look like an angry buyer. Back at the office they find out the diplomat has bought more than one car from the dead salesman.

When he gets questioned he reveals that the cars where gift also known as bribes. He never knew they were fake. He genuinely appalled to find out he was scammed out of nearly 2 million dollars. They questioned this guy over nothing. They’re back at square one.

The lucky break comes from finding out who was Cassidy’s importer. The importers killed the salesman. They were afraid he would talk but they didn’t kill the kid. Why would they kill the delivery guy. Carrie and Al believe them. It’s Eliot that wants to write it all off. He gives the group 48 hours to come with further evidence or else he’ll pin it on the importers.

Webster gives them just what they need. Ezekiel had gotten a shot that would have allowed him to go abroad. Say possibly India. Know who else has been to India? The diplomat. The same man that has a very pretty daughter.

She was planning on running away with Ezekiel. The diplomat used his daughter’s burner phone to set Ezekiel up. He tried to pay off Ezekiel and when that didn’t work he killed him.

Celine, the daughter, couldn’t take what her father did. She grabs a sharp object and threatens to kill herself. Carrie is able to talk her down.

They were afraid diplomatic immunity would kick in but they didn’t count on Eliot. He got the Swiss government to waive the privilege.