The Vampire Diaries Spoilers Round-Up: 10 Shocking Reveals For Season 5B! 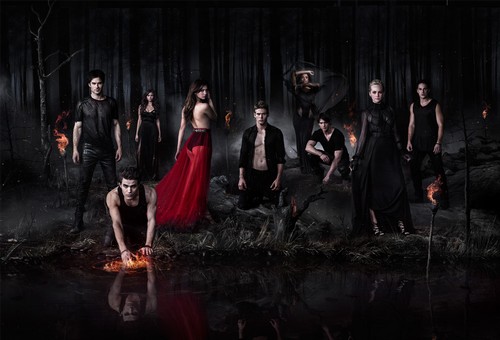 Enzo Is Sticking Around

Enzo, Damon’s cellmate, is sticking around Mystic Falls. We haven’t seen the end of Enzo! BTS photos have surfaced on Twitter with Enzo alongside the rest of the Vampire Diaries cast, they are currently filming Vampire Diaries Season 5B.

The CW has released promo videos for Vampire Diaries Episode 5.11, and it is titled “500 Days of Solitude.” In the promo video Katherine is in the hospital on her death bed, and the Mystic Falls gang is drinking at the Salvatore house and reminiscing about all of the not-so-good times they have shared with Katherine since they met her.

The Originals Are Back!

According to an interview on TV Line, Klaus Mikaelson is headed back to Mystic Falls. Apparently something huge goes down in Season 5B, and it’s so huge that Klaus feels the need to leave New Orleans and pay our favorite vampires a visit. And, there’s more, he’s bringing someone with him! There is still no words on who will be joining Klaus on his trip back to New Orleans, it is most likely one of his siblings, or possibly his baby-mama Hayley.

Fans really weren’t that shocked that Damon tried to dump Elena in the midseason finale, it just wouldn’t be a cliff-hanger episode without leaving fans wondering where the infamous couple’s relationship stands. Executive producer Caroline Dries recently dished on the break-up to TV Line, and according to her the couple will be reuniting in Season 5B, with the help of the last person any of us would expect, Stefan!

Ryan Kessler has been added to the Vampire Diaries Season 5B cast, he will be playing the part of “John.” You may recognize Kessler from his role on the 2012 movie, The Embers. There is no news yet on how John will fit into the Mystic Falls drama.

Caroline Dries recently dished on Season 5B and according to her there may be trouble ahead for Bonnie and Jeremy Gilbert. So far the couple has managed to keep it together, despite Bonnie’s death, but they will face some hurdles in Season 5B.

We just learned that Nadia is the long-lost daughter of Katherine. The CW has cast Ashlyn Jade Lopez to play the part of a “young Nadia,” so we can look forward to some flashbacks of Nadia as a child in Vampire Diaries Season 5B. We already know Katherine will be on her death-bed in “500 Years of Solstice” so it would be appropriate to revisit her daughter’s childhood during that time.

It looks like Caroline Forbes is going to have a gay best friend in Season 5B. Here’s what E! Online had to say about Caroline’s GBF, “A new hottie is enrolling at Whitmore after winter break! And he’ll be spending time with Caroline! Except he’s so not into her in that way as Luke, handsome and sarcastic, is gay. And also happens to have a sister on campus, one that he will do (or sacrifice) anything to protect.”

Tyler Lockwood Is Back

Tyler Lockwood returned to Mystic Falls to sleep with Caroline and dump her, then headed off to New Orleans in Season 5A, never to be hear of again. It looks like he may be returning to Mystic Falls in Season 5B though. Rick Cosnett (the actor that plays Dr. Wes) posted a behind-the-scenes photo on Twitter, which included Michael Trevino (Tyler). The only reason Trevino would be behind-the-scenes, is if he is shooting a few scenes. No news yet on how long Tyler will be in Mystic Falls for this time.

Aunt Jenna Is Back

The CW promised to pull out all the stops for The Vampire Diaries 100th episode, “500 Years of Solitude,” and they weren’t kidding! E! Online reported that Jenna Sommers, Elena and Jeremy’s Aunt, will be making an appearance in “500 Years Of Solitude.” Need a refresher? Klaus sacrificed Jenna in the Season 2 finale, killing off Jeremy and Elena’s only remaining relative, and we haven’t see her since. Ironically, Klaus will also be returning to Mystic Falls during this episode, so we are in for one hell of a reunion!