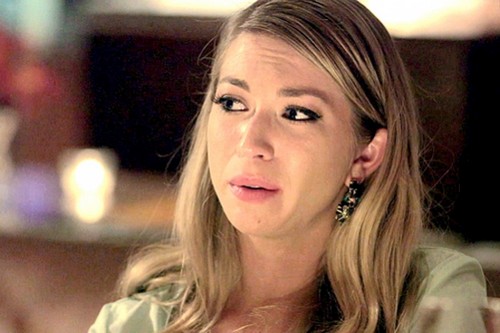 Tonight on Bravo VANDERPUMP RULES continues with a new episode called, “Branded.”  On tonight’s episode Jax gets Stassi’s name tattoo-ed on his arm, only to find she’s maybe seeing someone else.

Vanderpump Rules returned for Season 2 with even more rumors, secrets, and scandal airing as part of a two-hour crossover episode with The Real Housewives of Beverly Hills last week. The docu-series follows Lisa Vanderpump as she oversees Jax, Stassi, Scheana, Tom, Kristen, Katie and the rest of the red-hot staff at her red-hot West Hollywood restaurant and lounge, SUR.  If you missed the season 2 premiere episode last week, you can catch a full and detailed recap, right here.

On tonight’s show Jax gets a tattoo of Stassi’s name to prove his love, but before the ink is even dry, a romantic dinner turns into a shouting match when Stassi reveals there’s another guy in her life. Later, Stassi attacks Scheana for turning Lisa against her, and Tom attempts to put together the pieces of his broken relationship with Kristen but finds the instructions hard to follow.

Tonight’s episode is going to be another drama packed one, which you won’t want to miss. So be sure to tune in for our live coverage of Bravos’ Vanderpump Rules Season 2 episode 2— tonight at 10PM EST! While you wait for our recap, hit the comments and let us know how excited you are about the new episode of VR tonight and check out the sneak peek video below of tonight’s premiere!

Tonight’s episode of Vanderpump Rules opens with Stassi and Kristina out to lunch. Stassi is filling Kristina in on Scheana’s party, and her bizarre sense of fashion. Stassi reveals to Kristina that she has hooked up with Jax three times since they broke up. She says she can’t stop hooking up with Jax because she likes the way he “throws her around.” According to Stassi- her and Jax are JUST friends, she only has eyes for Frank.

Lisa stops by Sur to meet with her business partner Nathalie, and check on the progress of the bar that is being built in the garden. Lisa says she is looking for a new server to work in the garden.

Katie is working at Sur, and her boyfriend Schwartz shows up for his interview with Lisa. Katie is trying to get him a job at Sur with her. Lisa is impressed by his charm, and says that she will think about hiring him.

Pandora, Lisa’s daughter, and Scheana pay Lisa a visit at home. Scheana fills Lisa in on all the drama at her birthday party. She also throws Schwartz under the bus and says he caused a huge fight, Lisa says she isn’t going to hire him at Sur since he is causing drama. Since Scheana has a bruise on her foot, she can’t serve at Sur, so she is going to help out on Pandora’s blog while she is out of work.

Stassi is trying to serve people at Sur, but Jax is interfering. He wants her to go out to dinner with him, and she reluctantly says she will think about it.

Tom is trying to please Kristen and assemble a table she bought at Ikea. She is still bitter about his affair in Vegas, and gluing together a table isn’t going to help her forget any time soon.

Pandora and Stassi are discussing the magazine, Stassi is irate when Pandora breaks the news to her that Scheana will be writing on the blog as well. Stassi storms out when Pandora doesn’t waver on her decision to bring Scheana aboard.

Lisa runs into Katie while she is working at Sur, and tells Katie that she won’t be hiring her boyfriend Schwartz. She explains to Katie that Scheana told her about the drama he supposedly caused at her party, and that is why she won’t be hiring him. Katie is not happy with Scheana, she basically just ruined his chances of getting hired.

Stassi approaches Scheana about why she is trying to worm her way into her job on Pandora’s blog. Scheana denies Stassi’s accusations and says it was Pandora’s idea for her to write on the blog. Scheana tries to turn on the tears and make Stassi feel sorry for her about her tooth and her foot, but Stassi doesn’t buy it. She tells Scheana to “hobble away.”

Tom stops by Jax’s apartment, he heard he got Stassi’s name tattooed on his arm and wanted to see it with his own eyes. Jax doesn’t have time to chat about his new artwork though, he is getting ready for his date with Stassi. Tom kicks in to ultimate bro mode and helps Jax pick out his outfit, his jewelry, and even how he will do his hair.

Stassi is having a hard time getting to her date with Jax because Scheana is playing dirty at work. She won’t stop seating people in Stassi’s section. She finally gets free and heads out to dinner with Jax. Their date isn’t off to a good start though. Stassi desperately wants to see his new tattoos, but he isn’t ready to reveal her name on his arm. Their conversation turns bad fast, and they begin arguing about Jax being unfaithful when they were together. Jax asks Stassi if she wants him to move one, and she says yes. (Bummer – now he is going to have to get his new tattoo covered.)

Even though Stassi stormed out on their date, Jax gives her an awkward ride home. And, she literally makes Jax cry. Stassi has no pity though, because she remember how many times he made her cry. It doesn’t look like Jax and Stassi will be getting back together any time soon.