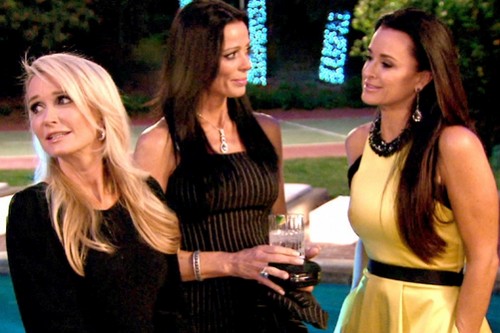 THE REAL HOUSEWIVES OF BEVERLY HILLS returns to Bravo tonight for Season 4 and the leading ladies of the most famous zipcode in the world embark on a journey with more ups and downs than a Hollywood script.

Tonight’s forth season premiere is called, “A Vodka Shot Through the Heart.” On this week’s episode Kyle hosts a party to celebrate Beverly Hills birthday — catered by the staff of Lisa’s restaurant SUR.

On tonight’s show  the beautiful, wealthy ladies of Beverly Hills and the sexy, dramatic servers of SUR are back for a special two hour crossover event. To celebrate the centennial of Beverly Hills and meet other local business owners, Kyle throws a cocktail party at her home for the city’s Chamber of Commerce. She hires Lisa’s posh restaurant, SUR, to cater the event but in typical fashion, one of her servers begins talking back and Lisa has to send her home before the guests begin to arrive.

At the party, Kyle tries to put aside her differences with Yolanda after last year’s explosive reunion, while Lisa struggles to keep tensions down between Brandi and Scheana. After the party wraps up, SUR staffers Stassi, Jax, Katie, Tom and Scheana head out to meet up with Kristen when serious tensions flare up. In an effort to mend her relationship with the group, Scheana invites everyone to her birthday party, but it doesn’t take long for catfights to erupt.

Tonight’s episode is going to be filled with the usual Housewife drama and you won’t want to miss it, so be sure to tune in for our live coverage of the show tonight at 8 PM EST! While you wait for our recap hit the comments and let us know how excited you are about the season 4 premiere of  “The Real Housewives of Beverly Hills!”  Also we have a sneak peek video of tonight’s show below!

Yolanda is really pushing Gigi into the limelight. Her daughter’s career is taking off and Yolanda is happy to get be hands on. Probably more hands on than any mothers would be. To her, her daughter is just a much more improved version of herself.

Brandi is house shopping. She really wants to upgrade now that her book is doing so well. Her realtor is none other than her new boyfriend JR. They really have more of a physical relationship than actually emotional. Brandi is at the stage where she doesn’t want any man to take care of her. She pretty much only wants to use them for sex. Which is great with JR.

She managed to get her new home and now has the problem of furnishing it. She apparently got rid of anything connected with her ex-husband. She has to be new furniture for everything while staying in her budget. It probably would have been smarter not to go shopping with Yolanda who doesn’t understand the word “budget”.

Lisa is has her mind in the gutter as well. She has to get very in tune with her dance partner for “Dancing with the Stars”. She had asked for a gay but they gave a hot, young, and completely heterosexual man. And although she’s worried how her family and especially her husband will view her new dance moves it doesn’t mean she’s not enjoying it.

She won’t enjoy her talk with Kyle though. Kyle has invited Yolanda despite saying she will never trust or like her once they establishes she’s a liar. Lisa still won’t pick sides in that fight so Kyle moves on to their issues. Lie how the rumor mill has them constantly arguing when they’re supposedly not. During this chat Kyle’s husband comes in with their little daughter. He just wanted to check in and say he was taking Portia with him and Lisa made the crack that the rumor he’s being seen with a younger woman must have comes from trips like these. Lisa found it funny, Kyle didn’t. She doesn’t want that kind of talk around her kids and she felt Lisa did it more as a punishment.

The party Kyle is throwing is for the opening of her new store. It’s a boutique and she’s managed to gain the interest of the chamber of commerce already. Her party is being catered by Lisa’s people. Yet while Kyle is getting ready Lisa had to dismiss a server for being insubordinate. Maybe Kyle should have hired someone else.

Her sister hasn’t reached yet. Kim is trying to work around her overenthusiastic dog. He has a behaviorally problem its truly difficult to get something done with him there.

Another person the party is waiting on is Yolanda. Kyle invited her and she thinks she’ll come but she still is hurt that Lisa doesn’t believe her story over Yolanda. She thinks Lisa may be a little intimidated by Yolanda and that’s why she won’t say anything against her.

Kim arises without mishap. Kyle also gets to meet someone new. She meets Carlton, Joyce, and whole other bunch of stranger through commerce association. By time Yolanda and Brandi arrived the party is underway. No one wants to start drama. Yolanda sticks to other side of the party by Lisa. Kyle sticks with the new girls. Unfortunately Carlton and Joyce rub each other from get go. So although Kyle tried to hide from women’s drama she ended up being a witness to beginning of another feud.

Brandi and Kim are inside. Brandi bumped into someone and had their drink spill all over her dress. In walks Scheana. Brandi noticed her grey tooth right away. Scheana knocked in a tooth and now one is discolored. Brandi didn’t laugh in her face but Scheana is self-conscious now. Lisa has to calm her down in order to get her back to work.

Not that it will stop Scheana from then making a scene with a fellow server. She wanted to know why no visited her in the hospital for her oral surgery. She says she was hurt none of her “friends” came to help. Lisa has put out that fire as well. The servers have really made several scene and are just lucky Kyle didn’t fire the lot of them. She really should have. She tried to explain at the end of the party that they’re cleaning up and they simply looked at her as if she was speaking a foreign language.

They ask each other why she doesn’t have any servants. Should they make her bed too? They clean albeit reluctantly. Still it was the incidents happened to always be blamed on someone else and never Scheana may come back to hurt their future endeavors. Everyone knows she’s Lisa’s favorite but how long is this one girl going to get away from making everything about herself?

The only person that correctly punished was Kristen for her unreasonable behavior at the party. She gets put on suspension.