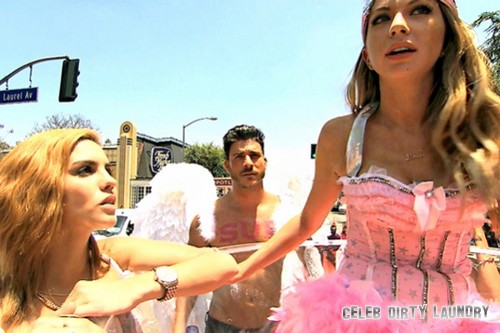 Tonight on Bravo VANDERPUMP RULES continues with a new episode called, “Lisa’s Angels.”  On tonight’s episode at the Gay Pride parade, straight relationships come to a head, as Jax and Stassi and Tom and Kristen continue to spar. Did you watch last week’s show?  We did and we recapped it right here for you.

On last week’s show Lisa enlisted Stassi and Katie to perform a sexy dance at Guillermo’s surprise burlesque birthday party. Jax was confronted with a health scare but received scorn instead of sympathy from Stassi. Then, Kristen picked a fight to stop the gossiping about Tom and the new bartender.

On tonight’s show Lisa and the SUR staff take part in the Gay Pride Parade. Things turn ugly when Stassi finds out that Jax is back to his womanizing ways. Kristen finds new evidence about Tom and Ariana’s relationship and confronts them both.

Tonight’s episode is going to be another drama packed one, which you won’t want to miss. So be sure to tune in for our live coverage of Bravos’ Vanderpump Rules Season 2 episode 6— tonight at 10PM EST! While you wait for our recap, hit the comments and let us know how excited you are about the new episode of VR tonight and check out the sneak peek video below of tonight’s episode!

Tonight’s episode of Vanderpump Rules opens with Lisa and some of her staff planning their float for the Gay Pride Parade. Lisa wants Scheana to sing her song on the float. And, the servers are going to wear huge white angel wings made of feathers. Tom isn’t thrilled about wearing the wings.

Tom, Schwartz, and Jax are going for a bike ride. Jax is embarrassed of his cist, so he has decided not to go shirtless during their ride. Jax reveals that he is putting himself back out there, and he is done wasting his time on Stassi. Tom shares with them that they have to wear angel wings on the float and Scheana is going to sing. Tom hops off his bike and imitates Scheana’s dancing moves, and her “booty pop.”

Lisa and her servers, and her party-planner Kevin, are working on their Gay Pride Float. Lisa asks Stassi and Katie if they have a problem with Ariana. Stassi reveals that the rumors are literally three years old, and no one knows what happened between Tom and Ariana.

Scheana pays a music composer named Mike a visit, to find a song to sing at the Gay Pride Parade. Scheana has never had any formal vocal training, and she can’t play more than Yankee Doodle on a piano, but she thinks since she used to be cheerleader she will have no problem being a pop-star.

Jax is out for drinks with his friends, enjoying being single again. It doesn’t take long for him to meet a ballerina, and kiss her…several times. They make plans to go out to dinner some time.

It is the day of the gay pride parade, and all of the servers are getting dressed up for the float. (Except for Kristen, she has to stay at the restaurant and hold down the restaurant.) Stassi is upset when she finds out that Scheana’s song is on a loop, and she will have to hear it 44 times while riding on the float. Lisa is upset because the servers are sneaking drinks and she wants them to be sober.

After everyone piles on the float, Jax decides it is an opportune time to tell Stassi that he hooked up with a 21 year old ballerina. Stassi is furious, he just told his Mom that he was “going to spend the next year of his life trying to win her daughter back.” Lisa is annoyed that they are literally arguing on the float in front of thousands of people. Meanwhile Scheana is singing her heart out…over and over.

After the parade, the Sur crew heads back to the restaurant for the after-party. Kristen heads outside to go on break with Stassi and Katie. Kristen reveals that she went throught Tom’s phone and found out that he has been sending some pretty suspicious texts to Ariana. Now she is concerned that the rumors about them might be true. Kristen decides to squash all of the rumors and confront Ariana. Ariana denies all of the rumors and insists that she never hooked up with Tom. Kristen starts crying, and Ariana thinks she needs medication.

Jax heads outside for his break, and Stassi and Katie are still outside. Stassi starts in on him as soon as he walks outside, and tells him he is “such a bad person.” Jax is convinced that the reason Stassi is so upset about his ballerina is because she is still in love with him.

Kristen is scheming. She decides to tell Tom that Ariana admitted to hooking up with him, to see if he will admit to it (even though Ariana denied it). She shows him screen shots of his text messages with Ariana, to prove that she knows he has been texting Ariana behind her back. After Tom cheated on her in Vegas, she knows he is capable of lying to her face. Tom denies all allegations of hooking up with Ariana, and Kristen storms away.