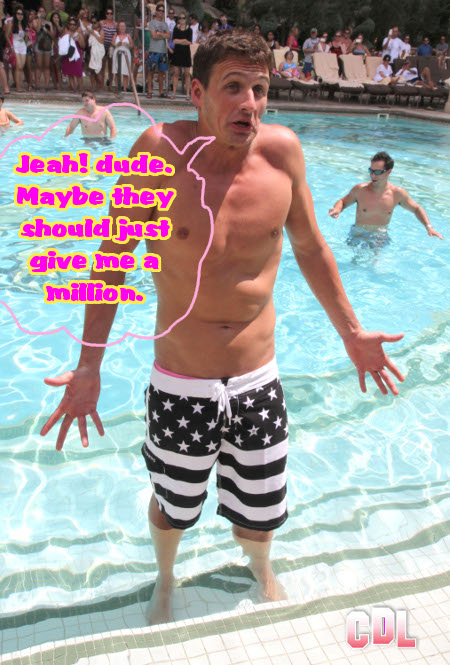 Producers of reality shows sign people based on talent and by talent, I mean their ability to capture interest. Like, the Kardashian’s are famous for simply existing and on any other show, the “villain” is always popular because they steal scenes. So why on earth did E! Decide to give Olympic swimmer Ryan Lochte a reality show? I was as confused as you are because last I knew it does take more than a six pack to get a show, then I saw the promos and it all made sense.

They are exploiting his utter stupidity. I’m not being the least bit sarcastic here, truly, this guy talks like he is trying to figure out what word comes next and he asks to have the most basic concepts explained to him, on camera. Then there’s his life itself. To say that it is boring and those around him are a snore is an understatement. Hey, in real life I’m all for a low key life but if you’re going to be on television then you have to bring something, anything to the table. Watching Ryan sputter through a sushi date is a painful, eye rolling experience.

Remember when he rallied hard to be cast as the next The Bachelor? Rumor has it that he sees What Would Ryan Lochte Do as a stepping stone to being cast as the next Bachelor. I guess Ryan thinks that producers from the alphabet network will see how charming he is on camera and feel the overwhelming need to line up 25 potential wives for him. Instead if they’ve watched 5 minutes of his first episode those producers will realize that this guy can kill even the most basic person with boredom.

Did you tune in to his show? Should Ryan hang up his television aspirations and dive back into the pool? Shutting up and looking pretty seems to be the best advice I can give him. Do you agree? Tell us your thoughts in the comments below!