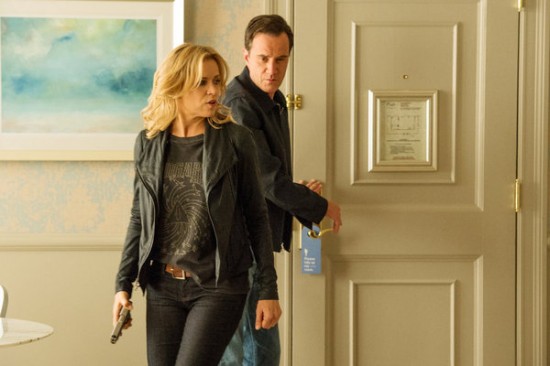 White Collar continues tonight with an all new, exciting episode called “Quantico Closure.” If you missed the previous episode and need to get caught up before tonight’s epic show, then be sure to check out our full recap RIGHT HERE.  On tonight’s episode, Neal will delve further into the mysteries of the Codex, all while Peter embarks on a top secret, classified mission with an FBI agent he’s a bit too familiar with — his ex girlfriend! This sounds like it’ll be a fun episode, so you won’t want to miss it.

On last week’s episode, Peter and Neal went undercover as professional ice skaters to expose a counterfeit passport ring in Little Odessa. At the end of the episode, the mysteries of the Codex were still left unanswered and wholly unexplored, but with tonight’s episode we’re looking forward to some answers and major revelations. Do you have any theories on the information/answers/mysteries resting within the codex? If so, we want to hear your insightful knowledge! Tell us. Explain all the things to us!

Be sure to stop by here later tonight at 9 PM EST for the live recap of White Collar season 5 episode 7 “Quantico Closure.” It’s sure to be a great one, and we’d love to hear your thoughts throughout the show. In the meantime, hit up the comments below to chat about all the things you’re loving about this season. Where do you hope the characters will end up by season’s end?

Tonight’s episode of White Collar opens with Peter and Neal shopping, Peter is picking up a suit for his anniversary dinner with his wife Elizabeth. His anniversary dinner goes downhill quickly when his ex-girlfriend from twenty years ago, Jill, crashes their date. Elizabeth invites her to sit down with them. Jill reveals that it isn’t a coincidence that she is at the same restaurant with them, she has been looking for Peter. She needs his help on a case.

Neal is showing Rebecca Chapter #13 of the Codex. Rebecca confirms that the chapter is authentic. Neal makes a major discovery, and realizes that the pages of The Codex are actually pieces of a puzzle. They put the puzzle together, and realize it is a picture of a stained glass window. Rebecca is so excited she kisses Neal, Mozzie interrupts them.

Peter and Elizabeth return home from their anniversary date. Elizabeth is feeling a little insecure with his ex in town, but Peter manages to sweet-talk her and smooth everything over.

At work the next day Peter learns that two days ago someone in Brooklyn stole a vehicle impersonating as an FBI agent, he thinks they used Segal’s badge. He tells Neal to investigate is with Jones. Jill visits Peter, and he kicks Neal out of his office. She tells Peter that she is tracking down a man named Mason Sadowski. He invented a microchip that can hack into any computer system. Jill is going to go undercover and pose as a buyer for the chip. She wants Peter to go undercover with her, and pose as her partner.

Peter heads home and tries to break the news to Elizabeth that he is going undercover with Jill, before he can tell her Jill knocks on the door and tells Peter they have to do recon. Elizabeth is less than thrilled, and even more annoyed when Peter and Jill won’t even tell her what the case is about.

Jones and Neal are trying to track down the man that is impersonating an FBI agent. Meanwhile Jill and Peter’s recon mission has turned into a heart-to-heart about losing Segal. Peter still feels guilty about his death, and Jill is comforting him.

Jones and Neal are cruising around a shady neighborhood. In Peter’s car, trying to bait the FBI imposter. He has been using an FBI badge to commandeer people’s rides, and then steals them. They are finally approached by a man who taps on the window and says he is an FBI agent. Jones and Neal hop out of the car and arrest him. He has been using Segal’s badge.

Madowski has finally left his hotel room, Jill and Peter sneak into his hotel room to snoop around. Madowski returns and they have to sneak back out of the room without any information.

Peter heads back to the office to interrogate the man they found with Segal’s badge and gun. The man claims he didn’t murder Segal though. He says that he was robbing a liquor store while Segal was shot, and that the store caught him on camera. He claims that he found the badge and gun in the garbage afterwards.

Peter heads home, and Elizabeth is waiting up for him. She asks about Jill and Peter’s case, but Peter tells her he can’t share any information. She is hurt, because they always discuss his cases, no matter how “classified” they are. She doesn’t get what is so special about Jill’s case.

The next day Jill and Peter learn that they are not the only ones looking for Sadowski’s chip. He is being stalked by mercenaries who plan on stealing it from him. Peter and Jill have to move fast. Peter wants to bring in Jones to help keep track of the mercenaries, Jill agrees, but insists Jones can’t know why he is following them.

Elizabeth reveals to Mozzie that she is starting to second-guess him working with Jill. Mozzie encourages her to follow Jill and see if anything is going on between her and Peter.

Jones is following the mercenaries, and they are inside a diner. Peter and Jill and preparing to go to Madowski’s room and make the buy while the mercenaries are in the diner.

Elizabeth has forced Neal to come along with her to stalk Jill. She is sitting outside watching Peter and Neal head into Madowski’s hotel. She hops out of the car with Neal to follow them inside.

Jones lost the mercenaries, they slipped out the back. He tries to call Peter and tell him that the mercenaries are no longer at the restaurant and he may be in danger, but Jill won’t let Peter pick up his phone, she wants “radio silence.”

At the hotel, Elizabeth runs into Madowski, and recognizes him from photos she saw on Peter’s desk. She tries to stall him, but he says he has to go, he offers to give her his number though. Elizabeth agrees, and hands Madowski her phone, when she isn’t looking he slips his chip into the pack of her phone. He knows the mercenaries are looking for him and he doesn’t want them to find it. As soon as he walks away from Elizabeth, the mercenaries grab him, and lead him upstairs. Elizabeth and Neal follow Madowski and the mercenaries. Elizabeth reveals that Madowski put his number in her phone, Neal takes the back off her phone and finds the chip.