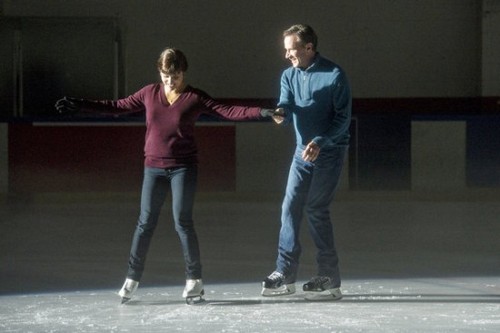 Critically acclaimed series White Collar continues tonight with a whole new episode called, “Ice Breaker”  On tonight’s show we meet a counterfeit passport ring in Little Odessa.  Did you watch last week’s episode?  We did and we recapped it right here for you.

On last week’s show Neal must go undercover as a butler to expose an impostor who aimed to inherit a Manhattan family’s fortune.

On tonight’s show Peter and Neal must go undercover as ice skating pros to expose a counterfeit passport ring in Little Odessa.

Tonight’s season 5 episode 6 looks like it is going to be great and you won’t want to miss it, so be sure to tune in for our live coverage of USA Network’s “White Collar” at 9:00 PM EST! While you wait for our recap hit the comments and let us know how excited you are for the season 5 episode 6 of  White Collar tonight.

Tonight’s episode of White Collar opens with Peter and Neal investigating a passport forgery ring, they are watching a surveillance video taken of the building.

Peter and Neal head to Odessa on a “routine visit” of the building they saw on the surveillance video. It turns out the suspicious building has actually been renovated and turned into an ice-skating rink. There is a figure skater dancing on the ice, when she sees them, she skates over to them. She tells them to leave before they get themselves killed. A man rushes to her side and tells them they have to leave, they are trespassing.

Neal says they are just at the rink to see Katya, the figure skater. He introduces himself as a sports agent, and Peter as a “figure skating coach of the stars.”

The man, Sergei, is suspicious, he hasn’t heard of either of them. He tells them that Katya has no interest in competing, and send them away. He does give them his business card though, and tells them that now just isn’t a good time, and to try again later.

Rebecca, a woman who works at the museum arrives at the office, and she accuses Neal of stealing her keycard. She wants to speak to Peter. Neal lies and says that Peter can’t help her and he will get a hold of the “art investigator” from the “art crimes division” for her, “Agent Gointzner.”

Agent Gointzner doesn’t exist, Neal is enlisting the assistance of Mozzie to pose as the fake “art investigator.” He is going to use his chiropractor’s old office, and pretend it is his. They plan on showing Rebecca the Codex they have been trying to decipher.

Meanwhile Elizabeth is giving Peter a crash-course in figure skating, and trying to teach him everything he needs to know to pose as a figure-skating coach.

Peter and Neal are on their way to Little Odessa to meet with Sergei about Katya’s figure-skating career. Neal convinces Peter to take his anklet off him before going into the meeting. They arrive at the meeting place and Sergei isn’t there. But, an old enemy of Neal’s is there, and Neal rushes him out before he blows his cover. And, forgets to go back inside. He calls Mozzie and says he ditched the anklet and Peter, and heads to meet up with him and Rebecca at their fake “art crimes division.”

Peter is forced to meet with Sergei by himself. Sergei has done his homework, and knows that Peter is not really a “figure skating coach to the stars.” Peter manages to salvage his cover by showing Sergei a fake website that they had created for him, and showed him pictures of himself posing with an Olympic medalist.

Agent Gointzner (AKA Mozzie) provides Rebecca with paperwork about her missing keycard. Then he baits her, he asks her for her assistance deciphering the Codex. She says she will think about helping them.

Sergei seals the deal with Peter. He tells him he starts tomorrow at the rink, but he has to stay on the ice and out of Sergei’s business. Peter leaves the meeting and Neal miraculously appears, he says he was just down the street the entire time getting coffee. Peter knows he is lying, and he tells Agent Jones to find out where Neal went during the meeting.

The next morning Peter is getting ready for work, Elizabeth is upset that he came home drunk after the meeting (Sergei made him takes shots), and that he has been working late and not spending any time with her.

Peter is at the rink skating with Katya. She knows he isn’t really a coach. He tells her that they will protect her if she tells them everything they know about Sergei. Katya doesn’t know much though, just that he brings bad people to Little Modessa. She says that in the beginning Sergei was a good man, and she moved here from Moscow to be with him. Now, he abuses her, and is she doesn’t marry him he will kill her.

Sergei interrupts their chat. Peter manages to impress him with some figure-skating jargon, and he seems content that Peter is legit. Meanwhile, Neal is searching through the Sergie’s office, looking for something to link him to passport ring. He finds a file on the computer and prints it out. He takes a few photos also. Peter is still stalling Sergei, and playing hockey with him on the ice.

A man arrives at the rink, Ivan (he made bail) to see Sergei. He knows Neal, Peter creates a distraction so Neal can sneak out without blowing his cover.

Back at the office, they find out Ivan is dead, his body was fished out of the river. Sergei and his Russian crew were obviously afraid he was going to talk.

Neal and Peter put together a plan to get Sergei and his entire crew in one place so they can take them all down. The Russians are always looking for an excuse to party, they decide to have Katya agree to marry him. All of his family and crew will be there to celebrate, and Peter and Neal can make their move. Katya agrees to the plan, Peter promises her that nothing will happen to her.

Katya tells Sergei she accepts his proposal, and Sergei plans to throw a party that night to celebrate. The plan is in motion. At the party, Peter gives a heart-felt toast, and then the FBI rushes in and places everyone at the party under arrest.

Peter and Neal see Katya off, she is leaving town, and they promised to protect her.

Agent Jones reports back to Peter about Neal slipping away during the meeting. He tracked down the office building he ran to, and discovered it was nothing but a chiropractor’s office. Neal and Mozzie’s Codex scheme is still a secret…for now.