BY Annemarie LeBlanc on May 7, 2013 | Comments: 3 comments
Related : Dancing With the stars, Dancing With The Stars Season 16, Reality TV, Recap, Television 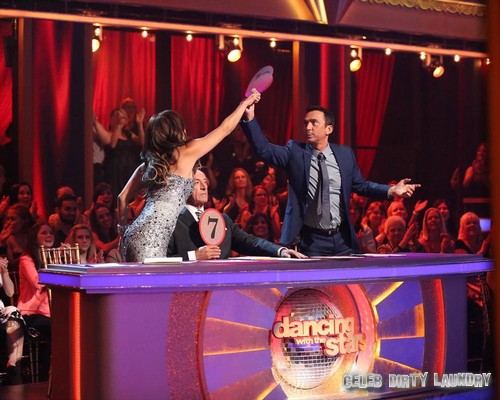 Tonight on ABC it’s another DANCING WITH THE STARS 2013 Season 16 Results Show and we will say goodbye to one more contestant. Last night the six remaining couples hit the dance floor and for the first time this season, each couple performed two routines in an effort to impress the judges and America. Did you watch the show? We did and we recapped it here for you. Did you miss any of the performances? We have all the videos here for your enjoyment.

We conducted a poll today and a majority of votes, 82.81% of predict that Sean Lowe will be the next celeb sent home tonight.  Ingo Rademacher follows second with only 15.7% of votes.  So far our poll is batting 100% week after week.   But things don’t always go as we expect and we’ve seen high scoring couples take the fall alongside low scoring couples, so you never know.  There is still time to vote in our poll, go HERE!

On tonights show one couple will be eliminated by the end of the show.  The show will feature music by singer Jason DeRulo, who will perform his current single, “The Other Side,” as well as Emeli Sande, who will perform her hit, “Next to Me,” and her new single, “Heaven.” . In addition, “Macy’s Stars of Dance” returns for its final installment of the season, featuring Derek Hough and Jaimie Goodwin. Paying homage to a Fred Astaire classic — but with a modern twist — this mind-bending routine will take place in a rotating room in yet another first for “Dancing with the Stars” and live television.

Dancing With The Stars Results Elimination Recap For May 7, 2013, CLICK HERE …