Who Will Be Voted Off Dancing With The Stars 2013 Week 8 Tonight? (POLL)

BY Annemarie LeBlanc on May 7, 2013 | Comments: one comment
Related : Dancing With the stars, Dancing With The Stars Season 16, Poll, Reality TV, Television 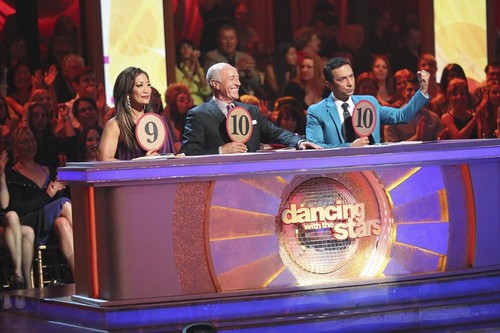 The competition is really heating up on Season 16 of DANCING WITH THE STARS as we are heading into the semi-finals next week.  Last night the remaining six couples battled it out and danced two dances. After last night’s performances at the top of the leaderboard is Zendaya and professional dancer Val Chmerkovskiy and at the bottom of the leaderboard is Sean Lowe and professional dancer Peta Murgatroyd. Did you watch last night’s show? We did and we recapped it here for you.

On last night’s show the six remaining couples took to the dance floor and for the first time this season, each couple performed two routines in an effort to impress the judges and America. In the first round, the couples performed a traditional ballroom dance in a style that they’ve not yet done. In the second round, the couples danced as part of a trio, featuring an eliminated pro or troupe member.

There were some great performances last night Zendaya leads the scoreboard and was scored a perfect score for her Salsa trio.   Carrie Ann said, “Hot, you are the Queen of the Salsa.  The way you brought all the styles together, I just loved it.  You were fabulous!”  Aly Raisman Argentine Tango impressed the judges.  Len said, Len: “It had mood, it had atmosphere, this is about a guy dancing with his mistress.  It was smooth and seductive.  Terrific!”  Kellie Picker caused the judges to bicker amongst themselves.  Carrie Ann and Bruno thought her Paso Doble trio was fabulous and scored her a perfect score. Len loudly disagreed saying, “I was expecting more than flashing lights.  It was a hodge podge of moves.  Where are the twist moves.  I don’t want to see crashing lights.  This girl is so talented.  You know I am right!”

Sean Lowe and his professional dancer Peta Murgatroyd are at the bottom of the scoreboard after last night.  Sean could just not get it together.  The judges thought he lost his focus during the tango and Len had this to say, “Plenty of punch and attack thing is you had too much punch you lost fluidity.  It was was not a great dance a bit ugly!”  His Jazz trio did not go much better and Len said, “It was a bit like your first dance, attack came in and style went out.”

Logic dictates that one of the couples with the lowest scores – Sean Lowe and professional dancer Peta Murgatroyd – will be leaving the competition.  No matter what the judges says, at the end of the day, the competition comes down to your vote at home. Who should leave? Vote in our trusty poll and let us know in the comments below which couple you think should be going home tonight.