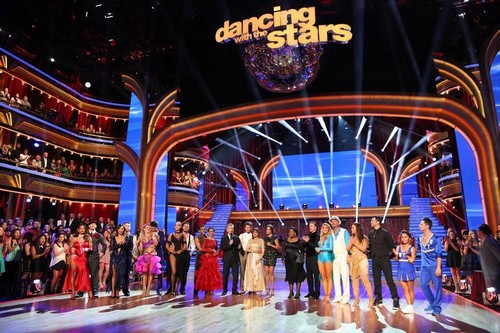 Tonight on ABC it’s the Dancing With The Stars 4th elimination of Season 17 and we will say goodbye to one contestant tonight. On tonight’s show there will be heartfelt performances which promise to be some of the most intense and emotional of the season.  Each of the remaining 9 contestants will dance to a song of the celebrities choosing that encompasses a memorable time or experience in their life.  Did you watch tonight’s show?   We did and we recapped it here for you. Did you miss any of the performances? We have all the videos here for your enjoyment, right here.

We conducted a poll today and 28.87% of viewers feel that Bill Engval will be sent home.  She is followed a far second by Amber Riley with 15.46% of the votes.  If you have not voted in our poll yet, there is still time.  [CLICK HERE]

RECAP: At the beginning of the show Tom already revealed that it will be one of the women stars who will be going home based on the viewers votes. After their Jive performance, Tom tells Elizabeth Berkley Lauren and Val Chmerovskiy that they are in jeopardy.

Elizabeth Berkley Lauren and Val Chmerovskiy  are safe too. It is now up to Christina Milian and Mark Ballas vs. Leah Remini and Tony Dovolani .

On this fifth week of competition, the couple leaving is Christina Milian and Mark Ballas.  See video below of the results.