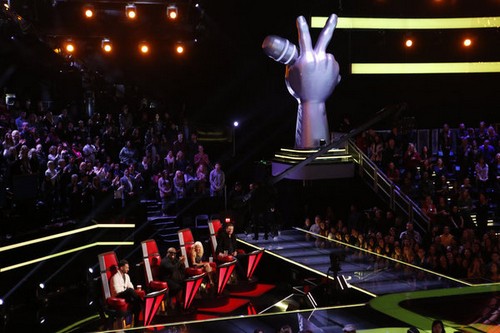 Tonight on NBC is an all new episode of THE VOICE. On tonight’s semifinal elimination show America will vote to eliminate two artists and the remaining three contestants will move on to the finale. Did you watch last night’s show when the Top 5 performed? We did and we recapped it here for you!

On last night’s show we were in the home stretch: Will Champlin, James Wolpert, Tessanne Chin, Cole Vosbury and Jacquie Lee have all run an amazing race. Their personal lives have been upended; they’ve endured a painful and public reckoning each week in the form of votes and Twitter saves, and now each had to give yet another above-and-beyond performance in order to survive. The artists were beyond exhausted; many are battling colds and worse. Last nigtht, they were  fueled by pure adrenaline and the prospect of a trip to The Voice finals.  If we had to pick a winner of last night’s performances, we would pick Tessanne Chin, she took the roof off the house last night.

We conducted a poll today leading the top of the poll to go home is James Wolpert with 39.54%of all votes.  Coming in second is  Cole Vosbury with 26.21 % of the vote.  It is still a close race and hard to predict.   If you have not voted in our poll there is still time, GO HERE!

On tonight’s show the voting results are revealed – and Jacquie, Will, Tessanne, James and Cole discover who’s headed for the finale after America’s vote.

Also on tonight’s show Coach Christina Aguilera will perform “We Remain,” off the soundtrack of “The Hunger Games: Catching Fire.”  In addition, artists from seasons past will return to the Emmy Award-winning musical competition series. Winners Cassadee Pope and Danielle Bradbery, as well as finalists the Swon Brothers and Michelle Chamuel will perform.

Tonight’s “Semifinal Results Show” is going to be an exciting one, which you won’t want to miss. So be sure to tune in for our live coverage of NBC’s The Voice – tonight at 9PM EST! While you wait for our recap, hit the comments and let us know what you have thought of Season 5 of The Voice, so far!

Tonight’s episode of The Voice opens with a recap of the final five Voice contestant’s semi-finals performances. Carson Daly introduces previous Voice contestants The Swan Brothers, they will be performing their song, “Later On.”

Before the first elimination of the night Carson discusses the impending eliminations with the judges. Regardless of who goes home, Adam will have a contestant in the finals, but overall he is happy that his team has stuck together. CeeLo thinks someone should lose gracefully and someone should win graciously. Christina loves how much passion, heart, and drive her contestant Jacquie has, she believes that Jacquie has blossomed into a true star before our eyes. Blake is confident that Cole is going to move forward tonight, he thinks he is a great artist and a great singer.

It is time for the first elimination of the night. The contestant with the lowest votes is Team Adam’s James Wolpert. James Wolpert is officially eliminated.

Up next is a live performance from another Voice alum Michelle Chamuel (she appeared on The Voice last season on Usher’s team).

Carson is revealing the contestant with that received the most votes. Tessanne Chin is safe, she will be heading to the Voice Finals.

Up next is a live performance from Voice alumni Cassadee Pope, singing her song “I Wish I Could Break Your Heart.” Blake and Carson present her with a plaque after her performance because they are so proud of everything she has accomplished since her appearance on The Voice.

Danielle Bradbery, another Voice veteran is performing live next. She is singing her song “Never Like This.”

Carson Daly is bringing out the remaining three Voice contestants, Cole Vosbury, Jacquie Lee, and Will Champlin. The second singer moving on to the finals is Jacquie Lee, she will be joining Tessanne Chin.

Cole Vosbury has been eliminated.

Jacquie Lee, Will Champlin, and Tessanne Chin are moving forward to the Voice finals.