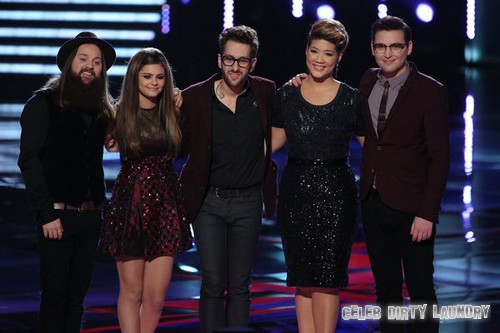 THE VOICE is one of our favorite singing reality competitions because the judges – definitely have a good time and are even quite funny. Tonight, The Voice season 5 will be returning with a new episode called, “The Live Semifinals.”  On tonight’s show the remaining five artists must give their best performances yet for your votes – and a spot in the finals.  Don’t forget the winner will be crowned next week.  In case you missed the last week’s show we have the full and detailed recap right here for you.

On last week’s show after what may have been the strongest night of performances in Voice history, America had its work cut out for it. Over-the-top songs from Cole Vosbury, Jacquie Lee, Tessanne Chin, James Wolpert, Matthew Schuler and Will Champlin left the coaches speechless – and the country wracking its brains over just whom to cut.  In front of a riser bedecked with icicle lights and a stylized Christmas tree, the Kelly Clarkson delivered her holiday single, “Underneath the Tree.” At the end of the show Matthew Schuler was sent home.

On tonight’s show “THE VOICE” SEMI-FINALS BEGIN – The top artists perform live in front of coaches Adam Levine, Blake Shelton, CeeLo Green and Christina Aguilera for America’s vote.  Will, Tessanne, James, Jacquie and Cole vie for your votes in a thrill-filled Voice showdown.

Tonight’s  The Voice The Live Semifinals”  is going to be an exciting one, which you won’t want to miss. So be sure to tune in for our live coverage of NBC’s The Voice – tonight at 8 PM EST!   While you wait for our recap, hit the comments and let us know how excited you are about the new season of The Voice.

James Wolpert, of Team Adam Levine, will be taking the stage first tonight.  Tonight he will be singing “With Or Without You,” By U2, which is one of Adam’s favorite songs ever.  He is excited for James to do a rock song, and he thinks it will show the people why they saved him last week (he was saved by Instant Save on Twitter).  Adam thinks tonight is the time for James to “bring it like he’s never brought it before.”

Adam doesn’t even care about the competition from this point, he knows how incredible his performance was.  He thinks James went “beyond what he knew he could do.”  Christina loved the song, and was happy to hear him sing it.  Blake also loved the song, since he was Instant Saved last week he needed a moment like this tonight.  He thinks James may have dug himself out of a hole this week by singing “With Or Without You.”

The next live performance will be Team Adam’s Will Champlin, he will be singing the song “Carry On” by Fun.  He is “absolutely thrilled to be one of the remaining members of Team Adam.”  Adam has chosen “Carry On” for Will, because he thinks the song gives him the opportunity to showcase his vocals.  Adam thinks that if Will can let loose tonight he could go all the way on The Voice.

Adam Levine is happy with his performance because he has never seen Will smiling this much, he is “gushing” and really proud of him.  CeeLo thinks it is cool to see Will looking “swaggy” up there.  He thinks “Carry On” is a wonderful song and he executed it perfectly.  Blake was “wrapped up” in his performance, he thinks that if Will keeps smiling and “opening up” on stage it can carry him all the way on The Voice.

Christina gives Jacquie Lee a standing ovation, Christina is amazed, Jacquie did things that she didn’t even know she could do.  She blew Christina away.  She thinks that Jacquie showed a lot of dynamic, and tonight was by far her best vocal performance, and she really stepped up to the plate.  CeeLo thinks Jacquie was “amazing,” and even though he has no one left to support she made him feel like he still belongs here tonight.

Next up is Team Blake’s Cole Vosbury.  Before tonight’s performance Blake and CeeLo took Cole to the barber shop to freshen up, they wanted to both spend some time with him and let him know that they are both supporting him.  Tonight Cole will be singing by Garth Brooks’ song “Shameless”, Blake chose it because it is both rock and country, and he thinks it suits Cole.  Blake thinks that he has more power than he shows, and he wants Cole to go “rockstar” tonight.

Blake thinks Cole did an “incredible job.”  Blake remembers when Cole joined his team and he wanted Blake to help him “find out who he is as an artist,” and he thinks tonight Blake found out.  CeeLo thinks that every song they choose for Cole to sing, he sings it like it his song.  He is “glad that his good buddy Blake has seen him all the way through.”

Team Adam’s Tessanne Chin will be the final performer tonight.  Her teammates think she is a “charismatic being” and “has so much love in her heart.”  Tonight Adam chose the song “Bridge Over Troubled Water” by Simon & Garfunkel for her because he thinks she will be able to showcase all of her abilities.  Tessanne is inspired by “Bridge Over Troubled Water” and she thinks that this song “means everything tonight” and she has to deliver it.

Adam Levine can barely get any comments in, the audience is going crazy after her performance. Adam says “he doesn’t even know what to say,” and he knows something serious is going on in her personal life, and he can’t believe her performance, he is speechless right now.  He thinks this was the most “graceful and flawless performance” he has ever seen on The Voice.  Blake is a huge fan of hers, and he is happy for her, he likes her as a person and as a singer.

Come and watch the final with  us tomorrow as we see who makes it to the final 3!