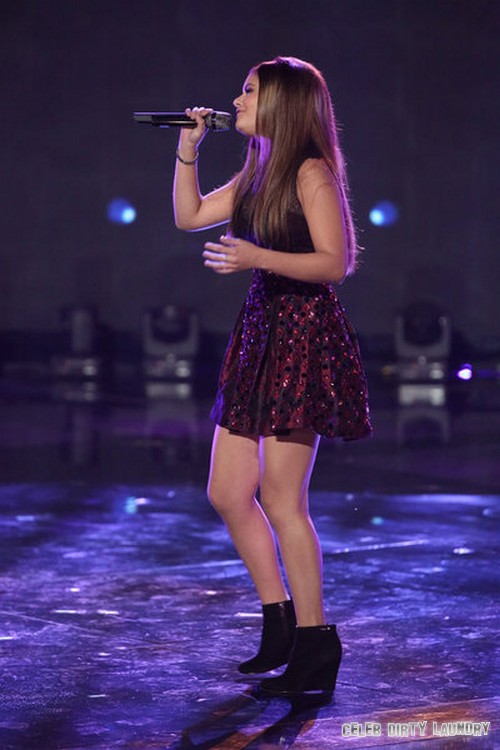 Jacquie Lee took the stage tonight on THE VOICE for her Top 5 Semifinal video performance.  Team Christina’s Jacquie Lee sang “Angel” by Sarah McLaughlin.  Tonight’s show the remaining artists from each coach, Christina Aguilera, Adam Levine, CeeLo Green and Blake Shelton team performed live for America’s vote and the chance to move on to the Finals.

Judges Comments: “Christina gives Jacquie Lee a standing ovation, Christina is amazed, Jacquie did things that she didn’t even know she could do.  She blew Christina away.  She thinks that Jacquie showed a lot of dynamic, and tonight was by far her best vocal performance, and she really stepped up to the plate.  CeeLo thinks Jacquie was “amazing,” and even though he has no one left to support she made him feel like he still belongs here tonight.” If you want Jacquie to make it to the semi-finals don’t forget you have to vote for her.

On last week’s show Jacquie sang “Cry Baby” and the judges loved her performance.  The judges said this about her performance, “Christina says that gets up from her chair and goes up to Jaquie; she shows her how the mic stand is on the floor and that she left her heart and soul on the floor. Christina says she sees so much of herself in her and loves how her courage is much strong now. CeeLo says it’s truly amazing; it’s like some sort of vessel where the spirit flies through. She gave such a powerful and real performance; he is completely amazed. Adam says the day her heart gets broken she will release such an amazing song.”