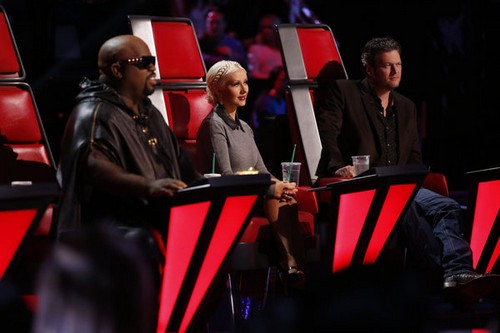 Tonight on NBC is an all new episode of THE VOICE. On tonight’s elimination show America will vote to eliminate two artists and the remaining eight contestants will move on to compete next week. Did you watch last night’s show when the Top 10 performed? We did and we recapped it here for you!

We conducted a poll today and there is a three way time with who will be sent home.  33,8% of our viewers think either Kat Robichaud will be sent home tonight and Austin Jenckes with 17.8% of the vote.  It is still a close race and hard to predict.   If you have not voted in our poll there is still time, GO HERE!

On tonight’s show the voting results are revealed – and America makes an instant save to determine the final choice for the Top 8.  The Voice and Twitter are combining forces once again to give viewers and fans of the competition show a chance to instantly save their favorite artists from elimination.  The “Instant Save” will take place live tonight.

RECAP: We start off with a recap of the performances from our top 10 artists last night; we now have Christina Aguilera with her team Jaquie Lee and Matthew Schuler; performing together on stage for the first time.

Adam says that tonight he feels like his team is putting on solid performances; but they still have their best to show but he’s not unhappy and has grown to love them so much. CeeLo feels like he has two of the best and believes he lets them take chance to be more dynamic; he thinks his team gives a solid run for the other artists money. Christina says it was so much fun to be on stage with them; she likes how eager they are to learn and grow in the music industry. She feels they are really special and have careers beyond this show; they have what it takes to take it all away. Blake tells Adam that he is beautiful for who is on the inside and the two hug; the four coaches then all have a group hug. Blake feels like all the artists this year are all talented and feels like the song choices are the hardest thing to do; but making it right is just amazing.

America has saved James Wolpert as the first man and put him into the final 8; James walks over and hugs Adam before leaving the stage. America also saved Matthew Schuler as the second man to be in the final 8 next week.

On stage right now is Will Champlin, Kat Raubichaud and James Wolpert performing together  singing a classic rock song.

Now is a duet by Tessanne Chin and Caroline Pennel; they are singing “Royals”.

The last artist saved by America’s votes is Cole Vosbury!

CeeLo says that all of these artists deserve to be here but truly hopes Caroline or Kat make it. Blake says Austin is an amazing singer and truly hopes America votes for him to stay. The instant save on Twitter starts now!