BY Dorothy Gale on May 22, 2013 | Comments: one comment
Related : Reality TV, Recap, Television, The Voice 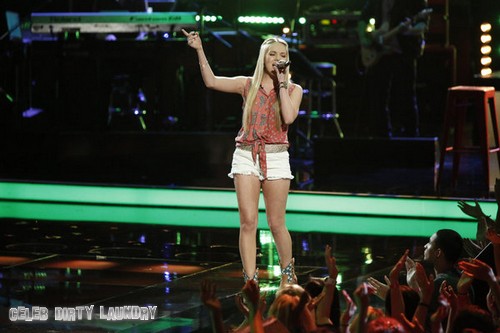 Tonight on NBC is an all new episode of THE VOICE. On tonight’s elimination show America will vote to eliminate two artists and the remaining eight contestants will move on to compete next week. Did you watch last night’s show? We did and we recapped it here for you!

Last night, the top 10 artists performed in front of coaches Shakira, Adam Levine, Usher and Blake Shelton for America’s vote and a chance to move on to the top eight.  Our vote for the top performance of the evening was sixteen-year-old Danielle Bradbery who sang “Heads Carolina, Tails California” by Jo Dee Messina.  She is confident, carefree and has a maturity in her voice.  The judges had this to say about her peformance: “Usher would go to Carolina or California with Danielle, he thinks she made country cool and is happy where Blake went with her. Adam thinks it is crazy, Danielle is such a superstar and every sixteen year old’s dream, it’s astonishing. Blake could go on and on about Danielle, she is amazing, the performance was carefree and she solidly delivered.” [VIDEO BELOW]

On tonight’s results show America’s picks for the Top 8 are revealed.  America will have some tough choices tonight, as only eight of last night’s performers can move on from here.

We conducted a poll today and 40% of our viewers thing Kris Thomas will be sent home tonight.  24% think it will be Josiah Hawley followed by Holly Tucker with 20% of the votes.  If you have not voted in our poll there is still time, GO HERE!

RECAP: Tonight two contestants will be going home. But first, Blake and his wife Miranda Lambert pay tribute to the people in Oklahoma by singing “Over You”.

For the first time this season, Shakira joins her team on stage singing “Stand By You”.

Time to check in with our coaches, Adam is very confident and thinks his team did a wonderful job. Shakira is convinced that her team did great and Sasha was the performance of the night. Usher is nervous and is never nervous; he puts his best foot forward and hopes his team reaps the rewards. Blake says he is so nervous that he has ulcers.

Here are the names of the first two artists that are safe and going on to next week’s live show, they are from team Blake Danielle Bradbery and from team Adam Judith Hill.

Team Blake takes the stage singing “Mountain Music”. Time to find out who else America saved, from team Usher it is Michelle Chamuel. One more, America also saved from team Shakira Sasha Allen.

Usher joins his team for the first time this season on stage, they sing “The Look Of Love”.

Time to find out who else America saved, from team Adam it is Sarah Simmons.

Team Adam take the stage to sing “I’ve Got The Music In Me”.

Time for more results, one more artist saved by America’s vote, from team Blake it is Holly Tucker.

More results again, America has saved from team Adam Amber Carrington. Under a minute left on the show, from team Blake it is the Swon Brothers.

Tonight we say goodbye to Josiah and Kris Thomas.