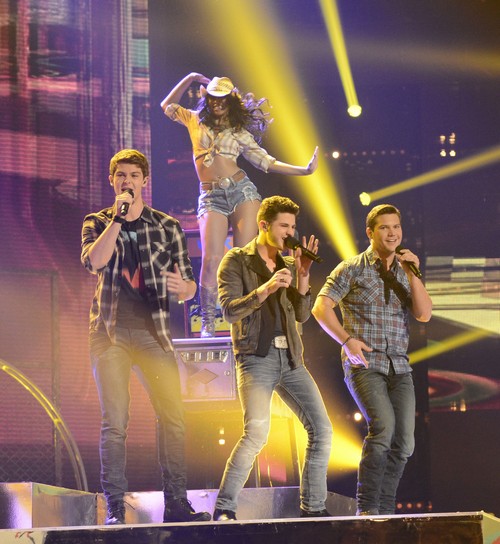 Tonight on FOX is an all new episode of THE X FACTOR. On tonight’s show another two acts are eliminated from the competition and we will be down to the Top 10.  Did you watch last night’s show where the top finalists performed live for America’s votes and we lost on artist at the top of the show?  If you missed it we have a full and detailed recap, right here for you.

On last night’s episode Carlos Guevara, one of Paulina Rubio’s Boys was eliminated on THE X FACTOR. Host Mario Lopez announced at the top of the show that Guevara received the fewest votes, following last week’s special Thursday night performance show. After the elimination, the remaining 12 acts performed hit songs from the 1980s for America’s votes.

My favorite artist from last night’s performances was Simon Cowell’s Restless Road they performed “Footloose” and they were awesome.  If you missed their performance you can see the video right here.

On tonight’s show actress and recording artist Selena Gomez performs her hit single, “Slow Down,” and Fifth Harmony returns to THE X FACTOR stage to perform their hit single “Me and My Girls.” Don’t miss an all-new LIVE results show, as another two acts are eliminated from the competition.

Who do you think will be the sent home tonight?  Who are your rooting for? Don’t forget to come back to this spot at 8AM to find out which artist was sent home and watch Selena and Fifth Harmony perform.

Kicking off the show is the final 12 singing together for the last time; two of them will be going home tonight as it is a double elimination; singing the song “A Perfect Day”. We now get a recap of last night’s performances from all of the 12 contestants and how they feel so nervous about some of the comments they received last night; all of them have a chance to go home in tonight’s elimination.

The first act going home tonight is Sweet Suspense; Simon does not look please at all with this choice. The girls are positive about it all and are proud to have met each other; Simon says he has no idea why they are going home because there were worse acts last night than them.

Next up is Selena Gomez performing her new single “Slow Down”.

We now see a recap of how the girl group Fifth Harmony was formed on the X Factor; they are now performing tonight on X Factor with their latest single.

In the danger of leaving X Factor is Khaya Cohen and Rachel Potter; first up to sing for her life is Khaya Cohen. Khaya felt really good singing her song and feels confident with all that she has done so far.

Next up is Rachel Potter singing for her very own survival to prove that she belongs in this competition; the judges now have to decide who goes home between these two girls.

Kelly is confused on why these two great vocalists are in the bottom two because it’s insane, she wants to see them grow but sends home Khaya Cohen. Paulina believes the two girls are so different but are both very talent, but decides that Rachel Potter would go home for her. Demi believes that America felt these two girls were safe and didn’t vote for them and decides to let Rachel Potter go home. Simon thinks they did well in the sing off but believes that Rachel Potter should go home. Rachel is going home and Khaya Cohen is moving on to the final 10.