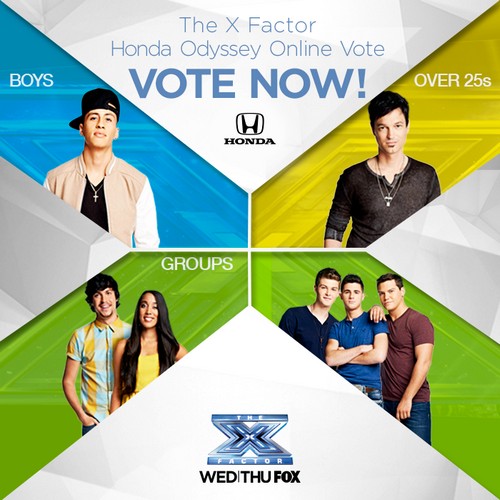 Tonight on FOX is an all new episode of THE X FACTOR. On tonight’s show another act will be eliminated from the competition and we will be down to the 3 contestants who are headed to the finale.  Did you watch last night’s show where the top 4 finalists performed live for America’s votes and sang two songs alone and one as a sing off?  If you missed it, we have a full and detailed recap, right here for you.

On last night’s episode, some of the performances were awesome and some were not so awesome.  The top 4 remaining contestants, Carlito Olivero, Jeff Gutt, Alex & Sierra and Restless Road took to the stage to perform 3 songs for America’s votes – one from the fans chose for them, the other the coach and artists chose and the other was a sing off.  The sang the songs in front of judges Simon Cowell, Kelly Rowland, Demi Lovato and Paulina Rubio for America’s vote and to make it to the coveted “Top 3 – finale”  If you missed any on last night’s videos you can see them all here.

On tonight’s show it’s another elimination, which will leave us with our X Factor Season Three Finalists.  Also on tonight’s show Jennifer Nettles and Enrique Iglesias are set to perform.  We know what Enrique is performing tonight he tweeted it to his fans, “I’m performing #HeartAttack TONIGHT on The X Factor !!!”

Who do you think will be the sent home tonight?  Who are your rooting for? Don’t forget to come back to this spot at 8PM to find out which artist was sent home and watch the performances.

Tonight one act will be eliminated and 3 acts will move closer to their dream.  Everyone wants to make it to the finals.  Tonight is the X Factor semifinal results.  There is no judges decisions helping the semifinalists tonight.

The show opens with the final four singing together one last time, they are singing Kelly Clarkson’s What Doesn’t Kill You.

Mario announced that on next week’s finale One Direction is coming back.

The first act going through to the finals is announced and it will be Carlito Olivero.  Carlito gets to perform.  He is singing “Suavemente” by Elvis Crespo.

Next up is Enrique Iglesias singing “Heart Attack.”

The third act making it to the finals is Jeff Gutt.  Jeff Gutt is singing a song by Journey called, “Open Arms.”

Tune in next week to find out who wins the title of X Factor and the Sony recording contract.  My fingers are crossed for Jeff Gutt.  Who are you rooting for?