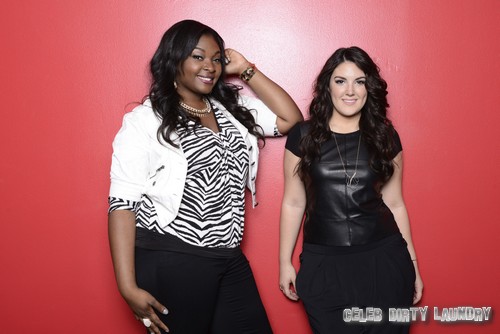 This is it!  After weeks and weeks of fierce competition tonight the new 12th season winner of AMERICAN IDOL will be crowned.  It will either be either country singer Kree Harrison or R & B singer Candice Glover.  Who is going to win?  Well it is still anyone’s guess.  Judge Randy Jackson declared it a dead heat after last night’s performance show.  Did you watch the show?  We did and we recapped it here for you!

On last night’s show Candice Glover and Kree Harrison battled it out for your votes one last time.  Both ladies sang three songs last night in hopes of getting your vote.  One was a  reprise of a song performed earlier in the season, one was chosen by Idol creator Simon Fuller, and one was a brand-new coronation song tailored to each singer.

Kree sang “All Cried Out” for her coronation song. For her coronation song, Candice sang a song called “I Am Beautiful”. Nicki Minaj said she loved Kree’s performance because she reached down in her gut. Keith Urban said it’s soul vs. soul and both songs were tailor made for the ladies.  We conducted a poll tonight to see who our viewers thought would win American Idol.  Right now our viewers are predicting a win for Candice Glover 52.6% are voting Candice and 47.54% Kree.  It is a close race.  If you have not voted there is still time, GO HERE!

On tonight’s show the most anticipated night of the television season is here!  The top finalists unite on stage on last time before Ryan Seacrest announces the newest American Idol.

There is a long list of performers on tonight’s Idol finale.  Judge Mariah Carey will perform a medley of her greatest hits, including “Vision of Love,” “Make It Happen,” “We Belong Together,” “My All,” “Hero” and, her new single “#Beautiful.”  She will be joined on stage by Randy Jackson on bass and a full gospel choir.  Her performance was pre-taped.  Fellow judge, Keith Urban is set to take the stage with his latest single, “Little Bit of Everything.”   Also scheduled to appear is PSY who will be performing his song, “Gentleman.”  There are also going to be several duets including: Adam Lambert with Angie Miller, Janelle Arthur with The Band Perry and Franki Valli with the season 12 guys.