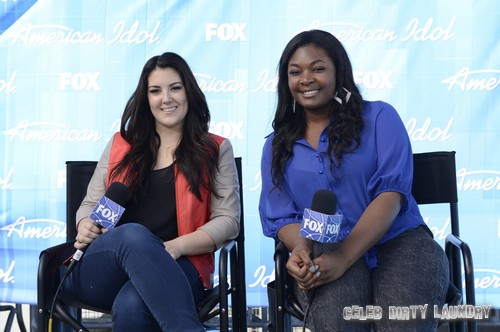 AMERICAN IDOL returned to FOX last night for the last performance show of the season and the remaining Idol hopefuls, Candice Glover and Kree Harrison battled it out for America’s votes.  Both ladies sang three songs tonight in hopes of getting your vote.  One a reprise of a song performed earlier in the season, one chosen by Idol creator Simon Fuller, and one brand-new coronation song tailored to each singer.   Did you watch the show?  We did and we recapped it for you, here.

So who was the standout performer last night?  It is hard to say both singer brought their all.  Randy Jackson said he would not have chosen either song for the ladies, but he gave Round 1 to Candice who sang “Chasing Pavements.” [VIDEO HERE]

For Round 3 Kree is performing “Up To The Mountain”. [VIDEO HERE]  Keith said it was beautiful. It’s her story, it’s all connected and it’s absolutely beautiful.  Candice closed out the show with “I Who Have Nothing”. [VIDEO HERE]  Standing ovation from all four of the judges. Keith said she’s such a powerhouse singer and the song is like a planet exploding to life. It was incredible.

On tomorrow’s results show the winner of AMERICAN IDOL will be revealed.   Although the season has been lackluster, the final results show will be a blockbuster.  Rumor has it both Keith Urban and Mariah Carey are set to perform.  Other performers rumored to be appearing are last year’s winner Philip Phillips, Adam Lambert, Jennifer Lopez, The Band Perry, Psy and a whole lot more