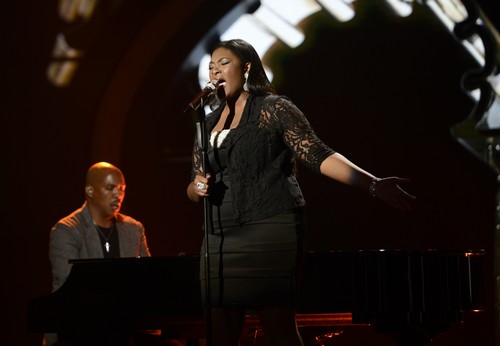 Last night AMERICAN IDOL exploded again with talent for as the remaining contestants had another try to make the Top 3 ! The final 4 ladies got a second change to battle it out for America’s vote after last week’s non elimination round. Each of the competitors sang two songs each last night and the theme for the night was “Then and Now.”  What that meant was, the contestants sang both an Oldie and a song from 2013.  Did you watch last night’s show? We did and we recapped it here for you!

On last night’s show Candice Glover was the one to beat, she had two perfect performances, she impressed the judges.  For her “Now” song she sang,  “When I Was Your Man” by Bruno Mars and Keith said it was a winning performance and it was beautiful.  [VIDEO HERE]  For her second song she sang “You’ve Changed” by Billie Holiday and she got a  standing ovation!  Randy said “Candice is in it to win it tonight!” She has an amazing voice. You have to feel everything and she did. Speak your truth, girl, that was amazing.”  [VIDEO HERE]

Amber Holcolm had one so/so performance and one great performance.  For her “Now” song she sang, “Just Give Me A Reason” by Pink and the judges were not feeling it.  Randy said everybody’s thinking about the end and asked if she was having fun. That was not stellar.  [VIDEO HERE] For her “Oldie” song Amber sang, “My Funny Valentine” by Mitzi Green/Chet Baker and she blew the judges away. Nicki said, “she was up there looking like a beautiful budding red rose. From the set to her outfit to her poise and she’s up there looking like she wants to cry. That was a great job.” [VIDEO HERE]

Angie Miller and like Amber she had one good performance and one great.  The judges were not impressed with her rendition of Rihanna’s “Diamonds.”  [VIDEO HERE] Nicki said, “she was trying to boost her performance with her body and not with her heart. She can do a lot better.”  For her “Oldie” song Angie took on “Someone To Watch Over Me” by Gertrude Lawrence/Ella Fitzgerlald and the judges love it.  Randy said, “he didn’t love the arrangement in the middle. If you can sing, you can sing anything. That was an amazing vocals.” [VIDEO HERE]

Kree Harrison took the stage tonight and sang her two songs, the judges love her first song, but did not like the arrangement of her second.  For her “Now” song, Kree took on, “See You Again” by Carrie Underwood.  Randy said, “she has an amazing voice, that was a great vocal and he loved it.”  [VIDEO HERE] Kree sang the last song of the evening and took on, “Stormy Weather” by Ethel Waters/Gladys Knight. Mariah said,”she was interested in the song choice. She thought she could’ve went for something more bluesy. It was a great vocal. It was as clear as a bell and beautiful.” [VIDEO HERE]