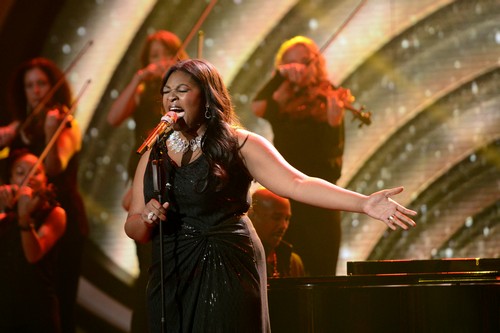 Last night AMERICAN IDOL exploded again with talent and the remaining 3 contestants gave it their all to make the Top 2 ! The final 3 ladies got a second change to battle it out for America’s vote after last week’s non elimination round. Each of the competitors sang three songs last night one was picked by the judges, another by Jimmy Iovine and the third by the producers.   Did you watch last night’s show? We did and we recapped it here for you!

On last night’s show Jimmy Iovine said that he felt each of the hopeful Idols won a round.  But Randy said that Candice Glover took the evening with her rendition of “Somewhere” from “West Side Story.”   The other judges had this to say about her performance, Keith said, “if you don’t vote for Candice, you don’t have a pulse.”  Nicki said, “See you next week”.   Mariah said, “Congratulations, she’s proud of her and can sing any type of song.” [VIDEO HERE]

Angie Miller‘s performance of “Maybe” by Emili Sande blew the judges away.  Randy said, “Tonight, she became a complete performer.”
Mariah agreed with Randy and said, ” she felt like Angie was her. She did an amazing job with the song.”  Keith loved it and Nicki said, “She has come full circle. As long as she feels it, they’re all going to feel it. Congratulations!” [VIDEO HERE]

Kree Harrison’s song of the night was “Here Comes Goodbye” by Rascal Flatts.  Nicki said, “You can’t underestimate or deny the power of a true emotional trigger. She’s super proud of her.”  Randy said, “She sang her heart out. That was unbelievably beautiful. That was brilliant.”  Mariah said, “No matter what happens from here, she will always have this.” Keith said, “It was the perfect song for her and she had him from beginning to end.” [VIDEO HERE]