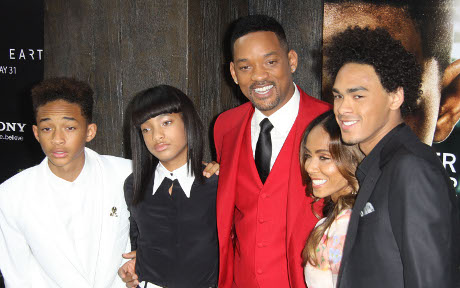 Will Smith and Jaden Smith are busy promoting ‘After Earth’ across the world, but it might not be enough to save the movie. It’s pretty much a given that M. Night Shyamalan has somehow lost the magic touch that made ‘The Sixth Sense’ a global hit. However, there was some tepid hope when ‘After Earth’ was first announced, largely because of Will Smith’s involvement. It looks like that hope was unfounded since whatever Will brought to the project has been spectacularly cancelled out by Shyamalan’s shitty touch.

‘After Earth’ is at an abysmal 13% rating on Rotten Tomatoes right now, and we’ve previewed some of the reviews. The review from the New York Times states, “Mr. Smith and his wife, Jada Pinkett Smith, are producers on “After Earth,” which suggests that there was no one on the production who could really say no to him.” The review from USA Today states, “Though it’s meant to be pulse-pounding, After Earth is a lethargic slog.” Peter Travers from Rolling Stone, who is usually one of the more lenient critics, writes, “After Earth merits comparison with 2000’s Battlefield Earth, John Travolta’s godawful film tribute to the sci-fi novel by Scientology founder L. Ron Hubbard. Yes, it’s that bad.”

So what went wrong? Well, for one thing, you never give M. Night Shyamalan full creative control. Have the studios learned nothing from the fiasco that was ‘The Last Airbender’? That guy should never be allowed to write his own stuff, and unfortunately, it seems like both he and Smith thought that they had a winner on their hands and wouldn’t really take others’ input into consideration.

‘After Earth’ releases this weekend. Will you guys be seeing this movie? Or will you opt for any of the alternatives in theaters? Let us know in the comments.